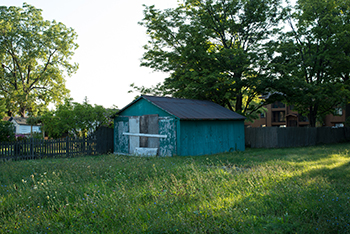 Light Work and Community Darkrooms will present the work of Willson Cummer in an exhibition titled “Dawn Light.” The exhibition will open Nov. 5, and run until March 7, 2014. A reception will be held Dec. 5.

“In late July of 2012, a five-month depression unexpectedly lifted. For the first time in a long while, I was able to wake up in the morning with energy, eager to explore the day,” says Cummer. “With my camera, I quickly began shooting the early morning light as it fell upon Fayetteville, N.Y., my hometown. I walked from my front door most times, and occasionally drove a bit further into the village. I wanted to explore the territory closest at hand.

“Light is a fundamental ingredient for photography. It has also, for centuries, been used as a metaphor for healing and recovery,” Cummer continues. “As a recovering depressive, I wanted to explore the dawn light on a metaphorical level. As an artist, I wanted to record the gorgeous cross-light of the early morning and the rich yellow hue of the direct light. I was attracted to humble structures: gas stations, parking lots, aging commercial buildings. The interplay of the natural world and the built environment is a subject which continues to excite me.”

Cummer is a fine-art photographer, curator and teacher who lives in Fayetteville. Images from his projects have been included in national juried exhibitions. His first solo New York City show opened in December 2011 at OK Harris. Cummer’s work explores humanity’s place in the environment. In addition to his own work, he curates and publishes the blog New Landscape Photography. Cummer has taught workshops at Light Work/Community Darkrooms, Syracuse University and Cazenovia College.