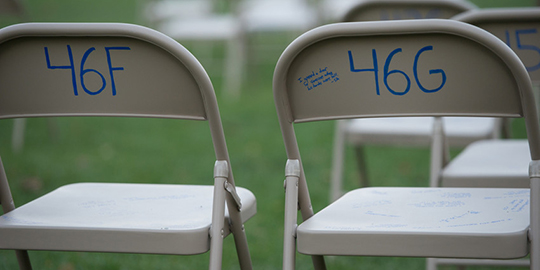 Empty chairs on the Quad in the configuration of the seats on Pan Am 103 symbolizes SU’s 35 lost students.

Syracuse University’s Remembrance Week 2013 is being held on the SU campus Oct. 6-12. The weeklong series of events honors the 270 people—including 35 students studying abroad through Syracuse University—who lost their lives in the terrorist bombing of Pan Am Flight 103 over Lockerbie, Scotland, on Dec. 21, 1988. This year marks the 25th anniversary of the tragedy.

Each year, 35 Remembrance Scholarships—one for each of the 35 SU student victims—are awarded in the amount of $5,000 to undergraduate seniors representing a broad range of majors. The Remembrance Week events planned and hosted by the students are meant to honor the victims and further education about terrorism.

This year’s Remembrance Week was preceded by a panel discussion on Oct. 4 (during Orange Central) on “The Legacy of Pan Am 103 at SU” and a moment of silence at the Oct. 5 football game vs. Clemson to honor the 270 victims. Remembrance Scholars also handed out bracelets to students before the football game.

An exhibition, “Lockerbie and Disasters,” photographs by Larry Mason, a professor in the S.I. Newhouse School of Public Communications, is currently on display in the lobby of Newhouse 1 through Oct. 24.

Portraits of the SU student victims will be on display in the Panasci Lounge of the Schine Student Center.

An exhibition of 35 empty chairs on the Kenneth A. Shaw Quad, an installation created by the 2012 Remembrance Scholars, juxtaposes the visual representation of 35 students lost with the good deeds inscribed upon the chairs. The exhibition is meant to serve as a reminder of how a lost past can inspire positive actions in the present. Individuals are invited to share their good deeds in blue boxes in the Hildegarde and J. Myer Schine Student Center, Huntington Beard Crouse Hall and Bowne Hall.

The School of Architecture has designed and constructed an installation in the atrium of Slocum Hall that remembers and honors those who were lost. The collaborative effort of the students and faculty demonstrates the ability of architecture to act as an agent of change through both cooperative participation and physical expression. A closing reception will be held on Friday, Oct. 18, at 5 p.m. in the atrium of Slocum Hall.

The Pan Am Flight 103/Lockerbie Air Disaster Archives has created a virtual TIMELINE that includes almost 150 events relating to the tragedy and its aftermath. From the search and rescue efforts to the current inquest in Libya, all pertinent dates related to the bombing are presented along with a relevant document, image or video found in the archives collection. An exhibition, titled “Twenty-Five Years of the Pan Am 103 Saga,” has also been installed on the sixth floor of Bird Library and highlights the most crucial events found in the larger online TIMELINE. The related materials may be viewed alongside a brief footnote explaining the importance of that event in the history of Pan Am 103. The exhibition in Bird Library will run through the end of the year. To see the full TIMELINE, visit http://archives.syr.edu/panam/timeline.html.

Beginning on Monday, Oct. 7, and continuing through Saturday, Oct. 12, individuals are invited to share their perspectives on Pan Am 103 through “Telling the Stories: The Pan Am 103 Story Archives Project,” a collaboration of the Pan Am 103/Lockerbie Air Disaster Archives, the 25th Anniversary Commemoration Committee and Syracuse Symposium 2013: Listening. Interviews will be done in 611 Bird Library by appointment. Call 315-443-0632 or email pa103archives@syr.edu to schedule an appointment.

A candlelight vigil will be held on the steps of Hendricks Chapel at 7:30 p.m.

Remembrance Scholars will engage in a community service project to make sandwiches for the Rescue Mission at 6 p.m. at the Marshall Square Mall (upstairs). Members of the University community are invited to join in.

“Since,” a documentary film on the Pan Am 103 tragedy by journalist Phil Furey, will be screened at 7:30 p.m. in Room 207 of the Hall of Languages. A question-and-answer session will follow.

The Pan Am 103/Lockerbie Air Disaster Archives, located on the sixth floor of Bird Library, will be open from 9 a.m. to 5 p.m.

Lesley Thomson, solicitor general of Scotland, will speak at noon in the Heritage Lounge in the College of Law.

A panel discussion on “25 Years Later: Reflecting on Pan Am 103 and the Media” will be held in Watson Theater at 7 p.m.

The Pan Am 103/Lockerbie Air Disaster Archives, located on the sixth floor of Bird Library, will be open from 9 a.m. to 1 p.m.

The Remembrance Scholars will hold the annual Rose-Laying Ceremony at the Place of Remembrance, in front of the Hall of Languages, at 2:03 p.m.

A tribute to the Pan Am 103 victims through live performances and art will be held at 7:30 p.m. in the Panasci Lounge in the Schine Student Center.

The 25th Anniversary Commemoration Committee and University College will sponsor a reception for current and former Remembrance Scholars.

Other scheduled 25th anniversary activities include a University Lecture by former Sen. George J. Mitchell, in conversation with James B. Steinberg, dean of the Maxwell School of Citizenship and Public Affairs on “Pan Am 103 and Our World 25 Years Later” (Tuesday, Nov. 12, at 5:30 p.m. in Hendricks Chapel); a panel discussion and photo exhibition by the Newhouse School of Public Communications and the Alexia Foundation for World Peace (Thursday, Nov. 14); and a photo exhibitions by Larry Mason—“The Healing of Lockerbie,” Oct. 25-Nov. 15 and “Forward Lockerbie” (Nov. 16-Dec. 21).