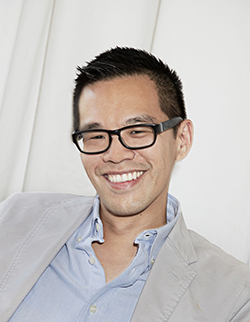 Author and journalist Jeff Chu will visit the Newhouse School on Tuesday, Oct. 15, as a guest of the magazine department. He will discuss his book, “Does Jesus Really Love Me? A Gay Christian’s Pilgrimage in Search of God in America,” at 5:30 p.m. in the Joyce Hergenhan Auditorium in Newhouse 3. Follow on Twitter at #ChuatSU.

Chu’s book, published this year by Harper, explores the intersection of faith, politics and sexuality in Christian America.

Chu is editor-at-large for Fast Company, where he has been heavily involved in finding ways to extend storytelling into different media. He is a past editor and writer for Condé Nast Portfolio and TIME, and has reported from dozens of countries on topics as varied as undercover Christian missionaries in the Muslim world, James Bond, George W. Bush and Swedish pop songwriters. Cover stories at TIME included features about the prosperity gospel in America and the alleged decline of Christianity in Europe. His work has also appeared in The Wall Street Journal, The New York Times and The Washington Post.

Chu was the founding web producer for TIME’s European website and is a founding member of the site Beacon, an experiment in financing freelance journalism.

Chu is an elder at Old First Reformed Church and was part of the 2012 Seminar in Debates on Religion and Sexuality at Harvard Divinity School.

A Q&A session and book-signing will follow his talk. For more information, contact Charlotte Grimes at 315-443-2366 or cgrimes@syr.edu.