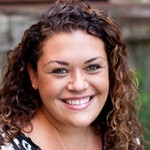 Introduced this fall, the Generation Orange Award recognizes Generation Orange alumni who have made an impact on campus and in their communities through their volunteer work and philanthropy on behalf of SU. Nominees must be younger than 35 and have graduated within the past 10 years.

Kahn received a bachelor’s degree in public affairs from The College of Arts and Sciences in 2010. She is a senior associate for GiveCorps, working with new clients to develop online fundraising strategies that engage millennial donors and creating tools that engage and empower donors, volunteers and community members.

Prior to joining the GiveCorps team, Kahn worked in the Office of Development at SU, where she was charged with creating a culture of philanthropy among students and young alumni. Through the creation and implementation of initiatives both on and off campus, students became more aware of the vital role philanthropy plays in their education, and young alumni from across the country were connected with their alma mater in new and meaningful ways.

Kahn lives in Baltimore. She serves on the board of governors of Hillel at Syracuse University and is active in her local community.