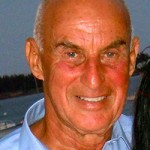 Established in 1988 by former Syracuse University Chancellor William Pearson Tolley in honor of then-Chancellor Melvin A. Eggers, the award recognizes senior alumni for their loyalty and service to the University.

The dinner is one of the highlights of this year’s Orange Central Celebration. Tickets are $30 per person. For more information or to make a reservation, contact the Office of Alumni Relations at 315-443-3258 or email orangecentral.syr.edu.

Hornung graduated from SU’s Whitman School of Management in 1953 with a degree in business. He went to work in the aluminum industry for two companies for 25 years in a sales capacity. He lived in Westport, Conn., during that period, married and had three children.

In 1980, at the age of 50, Hornung started a manufacturers’ rep business selling products to window and door manufacturers. The business grew, and his two sons joined him and still continue selling products throughout the United States. Hornung is retired and spends most of his time in Naples, Fla. He still has a home in Westport, where two of his children and grandchildren live. His daughter lives with her son in Florida.

Hornung has been a loyal supporter of Syracuse University for many years, giving both his time and treasure. He has served as chair for many of his class reunions and was instrumental in putting together one of the most successful 50th reunions held at SU. His classmates continue to look to him as their class leader. He was also instrumental in securing a lasting class reunion gift in the Orange Grove. “He is a kind man and always willing to lend his support and guidance,” says Cristina Swift, SU’s assistant director of alumni relations.

Vince Rigolosi ’54, Hornung’s good friend, says “There is no alumnus who is more deserving than Don, whose loyalty, love and service to his alma mater have been demonstrated time and time again since his graduation 60 years ago.”

Hornung was an active rollerblader for 20 years, until he was 79. “At 80, I got smarter and now stick to playing tennis several times a week,” he says.

“It’s been a nice run. Many thanks to SU for starting me on the right track,” Hornung says.