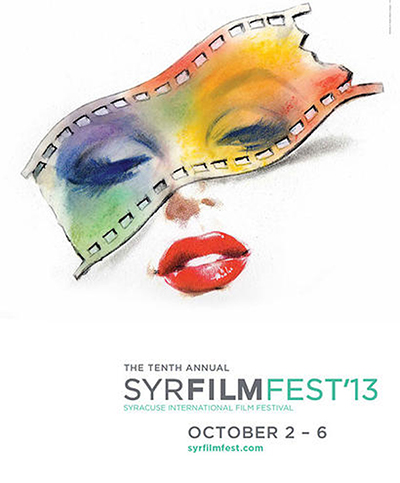 The Syracuse International Film Festival 2013 opens Wednesday, Oct. 2, with an art show and reception, “The Golden Era of Hollywood,” featuring work by Italian poster artist Silvano Campeggi, from 5:30-8:30 p.m. at the Landmark Theatre. The festival continues through Sunday with events throughout Syracuse. A full festival pass is $100 and is good for all movie screenings. A “Movie & Party Pass” is available for $40 (or $75 for two) and is good for any one party of choice during the festival.

Among the festival’s highlights:

Wednesday, Oct. 2: Opening Party and Art Exhibition, 5-8:30 p.m., Landmark Theatre; $40 admission /$75 for two, includes food, beverage, 10th anniversary wine glass and your choice of one movie admission to any of the festival events that take place between Oct. 3-6. Meet famed Italian film poster artist Maestro Silvano (“Nano”) Campeggi and his wife, artist Elena Renzoni, both from Florence, Italy, and view samples of his work on display.

Friday, Oct. 4: Screening of “Falling Down” and Conversation with Director Joel Schumacher, 7:30 p.m, Palace Theatre; $15 admission/$25 for two; pre-event happy hour at 5:30 p.m., $10 admission at the door. Enjoy a screening of “Falling Down” starring  Michael Douglas, Robert Duvall and Barbara Hershey, and meet Hollywood director Joel Schumacher and hear him talk about his films (“St. Elmo’s Fire,” “The Lost Boys,” “Flatliners” and “Phantom of the Opera,” among others). He will receive the festival’s award for filmmaking achievement—the Sophia—as part of this event.

Friday, Oct. 4: Conversation and Screenings with Joe Lynch and Adam Green, 9:45 p.m., Palace Theatre; $15 admission/$25 for two. Lynch is an SU B.F.A. film alumnus, while Green is a graduate of Hofstra University. They will discuss their work in the horror film genre and will screen Lynch’s “Wrong Turn 2,” Green’s “Frozen” and an episode from their TV series “Holliston.” This program is also the 2013-2014 kickoff for the popular FilmTalks series sponsored by Le Moyne College.

Saturday, Oct. 5: Screening of “Willow Creek” and Conversation with Producer Bob Goldthwait, 7:30 p.m., Palace Theatre; $25 admission/$35 for two. A native of Syracuse (Bishop Grimes High School), Goldthwait has brought each of his last three new films to the festival. As part of this event, he will be honored by the festival with a special award.

Saturday, Oct. 5: Goldthwait, Part 2, 9:30 p.m., Palace Theatre; $25 admission/$35 for two. Goldthwait will screen the short “Goldthwait Home Movies” he made with Tom Kenny, followed by a screening of his first feature, “Shakes the Clown.”

Sunday, Oct. 6: Screening of “Wall-E” and Conversation with Jim Morris, 3:30 p.m., Landmark Theatre; $15 admission; $25 for two and $5 for children under 12. Morris will talk about the making of “Wall-E,” which was his first film as executive vice president of PIXAR. “Wall-E” received 52 major awards, including the Academy Award, Golden Globe and the New York Film Critic’s award for Best Feature Animation. This award-winning film will be shown in 35mm with Morris giving insights and behind the scenes information about the film.

Sunday, Oct. 6: Syracuse Premiere of “Adult World” and Pre-Event Party, Landmark Theatre, party begins at 6 p.m., film begins at 7:30 p.m.; film: $20 admission/$35 for two; party and film: $40 admission/$75 for two. This is the long-awaited Syracuse premiere of “Adult World,” directed by Scott Coffey, produced by Syracuse native Justin Nappi and starring John Cusak, Emma Roberts and Amanda Riesco, with Cloris Leachman in a featured role. “Adult World” was shot in Syracuse. The film premiered earlier this year in the Tribeca Film Festival in New York. The story-line: a recent college grad who hopes to be a great poet finds herself working in an adult bookstore.