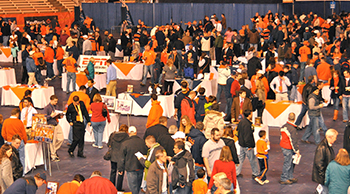 The Sport Management (SPM) Club will hold its ninth Annual Charity Sports Auction on Saturday, Dec. 7, at the Carrier Dome. Silent bidding on hundreds of auction items, including sports memorabilia and hands-on experiences, electronics and tickets to major sporting events, will take place in the backcourt during the SU men’s basketball game against Binghamton University.

The SPM Club is a student-run organization in the David B. Falk College of Sport and Human Dynamics’ Sport Management Department. Since its founding in 2005, the club has raised nearly $200,000 for local charities. All of the proceeds from this year’s auction will benefit the Food Bank of Central New York.

“Food Bank is pleased to have been selected as the charity of choice for the sport management auction. It is rewarding to see local organizations support our mission to reduce food insecurity,” says Kathleen Stress, executive director, Food Bank of Central New York. “Every dollar raised is able to provide 2.3 meals back into the community, helping families with nutritious meals for their children.”

Previous beneficiaries of the club’s annual charity auction have included the Boys & Girls Clubs, American Diabetes Association, Golisano Children’s Hospital at Upstate, the Ronald McDonald House Charities of CNY, the Central New York SPCA, the Upstate Cancer Center and most recently, Special Olympics New York, which was given a record-breaking $35,239.

The purchase of a game ticket for the Dec. 7 men’s basketball game is necessary for access to the auction. Tickets can be purchased on the SU Athletics’ Web site (http://suathletics.com) or at the Carrier Dome Box Office. Tickets can also be ordered by phone at 1-800-DOMETIX. Follow the Syracuse Charity Auction on Twitter @SU_SPM_Auction, and on Facebook. Visit www.sucharitysportsauction.com for the most current information on the auction.