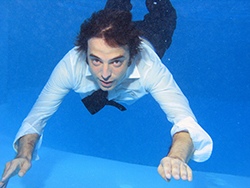 Etgar Keret, the popular Israeli writer and filmmaker, will present this semester’s second Raymond Carver Reading Series at 5:30 p.m. Wednesday, Oct. 9, in Gifford Auditorium. A question-and-answer session will precede the reading from 3:45-4:30 p.m.

Keret was shortlisted in August for the third Warwick Prize for Writing for his 2012 story collection, “Suddenly, a Knock on the Door” (FSG Originals, 2012). “Exuding a rare combination of depth and accessibility, Keret’s tales overflow with absurdity, humour, longing and compassion, and though their circumstances are often strange and surreal, his characters are defined by a familiar and fierce humanity,” reads the Warwick nomination. “’Suddenly, a Knock on the Door’ is at once Keret’s most mature and most playful work yet, and establishes him as one of the great international writers of our time.”

He is the author of six short story collections, which have been translated from Hebrew. They are”Suddenly, a Knock on the Door,” “Four Stories” (Syracuse University Press, 2010), “The Girl On The Fridge” (Farrar, Straus and Giroux, 2008), “Missing Kissinger” (Vintage Books, 2008), “The Nimrod Flipout” (Farrar, Straus and Giroux, 2006), and “The Bus Driver Who Wanted to Be God & Other Stories” (Toby Press, 2004). He has also written graphic novels and a children’s book. His work has appeared in publications, including The New York Times, Le Monde, The Guardian, The Paris Review, The New Yorker, Harper’s Magazine and Zoetrope.

Reviewers describe his stories as whimsical, funny, surreal, and short—some just paragraphs long. “Keret alights upon protagonists in the midst of psychic upheaval, willing to embrace the bizarre twists that deliver them to their appointed grace or ruin,” a New York Times reviewer wrote of “Suddenly, a Knock on the Door.” “The humor in their travails arises not from an effort to charm the reader but to confront the darkness that shadows our human folly.”

Keret has also written several movies for television and screen and has directed three movies. “Jellyfish,” which he directed with his wife, Shira Geffen (who wrote the film), won the Camera d’Or prize for best first feature at Cannes in 2007. “Working with a sureness of touch, the film’s directors understand that what’s imaginary and what’s real can be made to look the same on film, and that what makes logical sense is less important than deeper emotional truth,” the Los Angeles Times wrote in 2008.

Keret’s stories have been featured on NPR’s “This American Life Selected Shorts.” “Suddenly, a Knock on the Door” was recorded as an Audible Audio Edition. Narrators include Ira Glass, Willem Dafoe and George Saunders G’88.

Keret talked about his writing routine in a 2012 interview with the San Francisco Bay Guardian. “It is a bit like saying ‘having-a-once-in-a-lifetime-insight-which-makes-you-want-to burst-into-tears routine,’” he said. “There has never been anything routine-like about writing for me. I sit down and start writing only when I have a story in mind.”

Fall 2013 Series Schedule
The Raymond Carver Reading series will continue with the following authors. All readings begin at 5:30 p.m. in Gifford Auditorium. Question-and-answer sessions are from 3:45-4:30 p.m. Further information is available by calling 315-443-2174.

Oct. 16: David Baker, a poet whose books include “Never-Ending Birds” (W.W. Norton, 2009) and “Talk Poetry, Poems and Interviews with Nine American Poets” (University of Arkansas Press, 2012). He is also the poetry editor of the Kenyon Review.