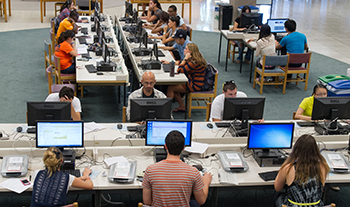 Early this fall, hard drives in all of the Libraries’ public computers were replaced with solid-state drives, which are faster and more reliable than the old drives.

One of the most common complaints the SU Libraries receive from students is how slow its computers are. Given that library computers are the most heavily used on campus, the ‘ibraries’ information technology staff have been looking for ways to speed up the process.

Early this fall, hard drives in all of the libraries’ public computers were replaced with solid-state drives, which are faster and more reliable than the old drives. Boot-up scripts were also streamlined. These actions have reduced by half the time it takes a computer to restart and be ready to use. It will also speed up the time it takes libraries’ technical staff to perform ongoing maintenance and security updates.

The libraries’ computers require a reboot each time there is a new user to address information security and privacy issues, to prevent the spread of viruses across the network and to allow public access, a requirement for all U.S. government depository libraries. The reboot removes all user data created during a session, including personal content, website user names and passwords. This prevents future users from being able to access someone else’s personal information.

Another way users can improve the time it takes to boot up one of the libraries’ computers is to reduce the size of their roaming Windows profile. The SU ITS Service Center in 1-227 CST can assist students in making changes to their roaming profiles to reduce load time.