Airmen Lost, Injured in 1959 Barracks Fire to be Honored 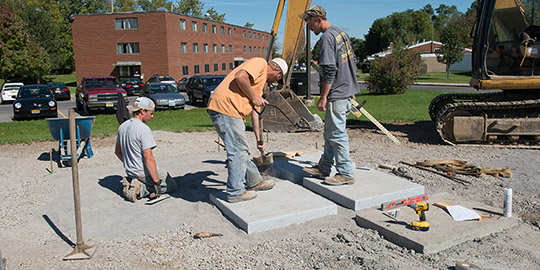 Workers prepare a bed of granite pavers to support the new memorial honoring those lost and injured in a barracks fire in Jan. 1959 on the Syracuse University campus. The seven tiles in the base will represent the seven airmen who died in the fire. The memorial is located on Lambreth Lane, South Campus.

Syracuse University and a group of Air Force Security Service airborne reconnaissance veterans, known as the Prop Wash Gang, will come together on Friday, Oct. 4, at 3 p.m., to unveil a new memorial that will honor those injured and lost during a catastrophic fire that occurred more than 50 years ago on the University’s South Campus.

Named for the wake turbulence pilots encounter when flying directly behind another aircraft, the Prop Wash Gang was founded in 1996 by Larry Tart, a retired Air Force senior master sergeant from State College, Pa. Tart was rallying support for an aerial reconnaissance memorial honoring 17 airmen lost in another tragedy—the shootdown of a U.S. Air Force reconnaissance mission on Sept. 2, 1958—when members of an online forum began reminiscing about their experiences in a U.S. Air Force training program they attended together on the SU campus.

Starting in 1951 and continuing for two decades, Syracuse University hosted a language training program for the U.S. Air Force Institute of Technology (AFIT), teaching hundreds of enlisted airmen Russian or an East European Slavic language in intensive six- to 12-month courses. It operated from 17 aluminum-clad prefabricated wood buildings (M-0 through M-16) along what is now Lambreth Lane on South Campus. Eight buildings were used as barracks housing for enlisted airmen assigned to AFIT Detachment One at Skytop.

During the early morning hours of Jan. 6, 1959, fire broke out in barracks M-7, which housed 43 airmen. The fire spread through the wood structure quickly. Seven airmen died in the fire and 19 were hospitalized. To date, there has been no site of commemoration or memorial on the SU campus to the airmen lost and injured.

In 2012, on behalf of the Prop Wash Gang, Tart approached the University’s leadership, asking if they would consider creating a permanent memorial to those who were lost. SU Chancellor Nancy Cantor quickly agreed. 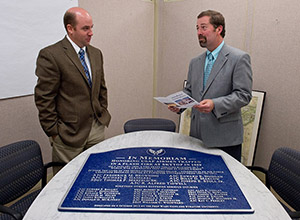 Joe Alfieri, left, and Eric Beattie look over the plaque honoring the airmen injured and lost during a catastrophic barracks fire more than 50 years ago on the University’s South Campus. The plaque is part of a new memorial to be unveiled Friday, Oct. 4. Beattie is director of the Office of Campus Planning, Design, and Construction. Alfieri is a senior project manager in the office.

“Although this tragic event occurred more than 50 years ago, when we learned that there had not yet been a memorial on campus to recognize those who were lost and injured, Chancellor Cantor absolutely wanted to work with the Prop Wash Gang to make it a reality,” says SU’s Senior Vice President for Public Affairs Kevin Quinn. “We look forward to welcoming back to campus some of our veteran airmen and recognizing and remembering those who were killed that morning.”

Eric Beattie, director of Campus Planning, Design and Construction, says a task force worked with Tart to design and secure a location for the permanent memorial. A plaque—engraved with the names of the seven airmen who died and the 19 others who suffered injuries—will be secured to a pedestal on Skytop Plaza, overlooking the area where the barracks once stood.

“The memorial has reinvigorated our Prop Wash Gang and we’re holding a special reunion in Syracuse in tandem with the memorial dedication,” says Tart. “One hundred Air Force veterans, many of whom witnessed the fire, will honor lost classmates at the unveiling. My one regret is that several ardent advocates for the memorial are too frail to travel here to pay tribute to their lost brothers. They will be with us in spirit.”