Chef David Shalleck, a 1983 graduate of the College of Visual and Performing Arts’ Department of Drama, will hold a cooking demonstration and book signing on Friday, Oct. 4, at 3 p.m. as part of Syracuse University’s Orange Central celebration. The event, which is free and open to the public, will be held in Room 304 of the Hildegarde and J. Myer Schine Student Center. 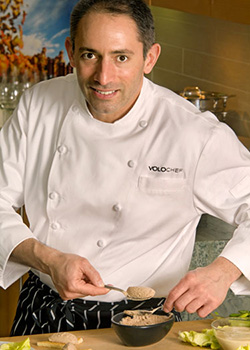 Copies of Shalleck’s culinary travel memoir “Mediterranean Summer” (written with Errol Munuz, Broadway Books, 2008) will be available for purchase and signing following the demonstration. The book offers readers “an alluring and evocative summer voyage on the Mediterranean Sea and into the enchanting coastal towns of France and Italy by the young chef aboard an Italian billionaire couple’s spectacular sailing yacht.”

Shalleck, who lives in San Francisco, has worked for more than two decades as a fine dining chef and television culinary producer alongside some of America’s most celebrated chefs and hosts. He has cooked in noted restaurants and for special events in New York, San Francisco, Napa Valley, London, Provence and throughout many of Italy’s famous regions. He has created Mediterranean menus for Windstar Cruises and is also the founder of VOLOCHEF™, offering private dining and specialized services to the food service and media industries.

As a culinary producer, Shalleck has worked on more than 250 shows, including the PBS series “More Fast Food My Way” with Jacques Pepin, “José Made in Spain” with José Andrés and “Chef’s Story” at the French Culinary Institute, and he has made appearances with Cat Cora on the Food Network’s “Iron Chef America.”

Parking for the event is available in SU pay lots. For more information, contact Traci Washburn, VPA director of alumni affairs, at 315-443-4728 or tmwashbu@syr.edu. SU alumni may register for Orange Central at orangecentral.syr.edu.