Carrie Mae Weems, a two-time SU artist-in-residence (1988 Light Work Gallery and 2005-06 VPA), instructor and ongoing collaborator in SU engagement projects, has been named one of 24 MacArthur fellows for 2013.

The fellowships “recognize 24 exceptionally creative individuals with a track record of achievement and the potential for even more significant contributions in the future,” according to the MacArthur Foundation. The fellowships are commonly known as the “genius grants.” 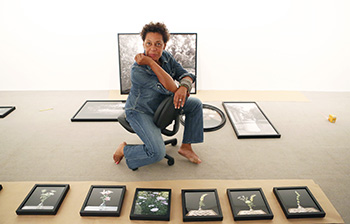 Weems is a photographer and video installation artist examining the complex and contradictory legacy of African American identity, class and culture in the United States. Her intimate depictions of children, adults and families in simple settings document and interpret the ongoing and centuries-old struggle for racial equality, human rights and social inclusion in America.

The MacArthur Foundation website lauds Weems by saying: “In images that are lyrical and evocative, Weems unites critical social insight with enduring aesthetic mastery. Her signature works over three decades—‘Ain’t Joking’ (1987), ‘The Kitchen Table Series’ (1990), ‘From Here I Saw What Happened and I Cried’ (1995), ‘The Louisiana Project’ (2004), ‘Roaming’ (2006)—juxtapose the harsh realities of race, class and gender discrimination with the dignity and resilience of the human character in everyday life. She enriches the traditional black-and-white cinéma vérité style with African American folklore, multimedia collage and experimental printing methods, and in many of her prints, she casts herself as silent witness and guiding avatar through ‘fictional documentaries’ in contemporary surroundings or historical recreations. Resurrecting lives and legacies invisible in plain sight, familiar but unseen, Weems creates a poignant and revealing visual archive of the human condition.

“Recently, she has extended her talent to social reform efforts in Syracuse, N.Y., with projects such as Operation Activate, a public art campaign to create awareness of an initiative to stop gun violence, and the Institute of Sound and Style, a pilot summer program that engages local youth in experiential training in visual art. An extraordinary photographer and social activist, Weems is demonstrating the power of art to directly impact a community broadly, beyond patrons of museums or private exhibitions.”

MacArthur fellows will each receive a no-strings-attached stipend of $625,000 (increased from $500,000) paid out over five years. Without stipulations or reporting requirements, the fellowship provides maximum freedom for recipients to follow their own creative vision.

“This year’s class of MacArthur fellows is an extraordinary group of individuals who collectively reflect the breadth and depth of American creativity,” says Cecilia Conrad, Vice President, MacArthur Fellows Program. “They are artists, social innovators, scientists and humanists who are working to improve the human condition and to preserve and sustain our natural and cultural heritage. Their stories should inspire each of us to consider our own potential to contribute our talents for the betterment of humankind.”