Chance the Rapper to Perform in Schine Underground Nov. 6 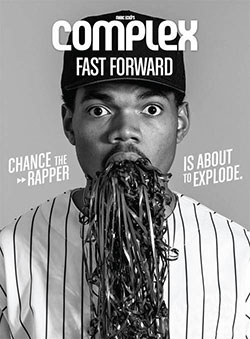 Chancelor Bennett, known by his stage name, Chance the Rapper, is set to perform in the Schine Underground on Wednesday, Nov. 6, as part of his Chance the Rapper’s Social Experiment Tour. DJ Rashad and DJ Spinn will open for the Chicago rapper. The Bandersnatch Series performance will be held at 7:30 p.m.; doors will open at 7 p.m.

Bennett first appeared in the spotlight in 2011 after the release of his first mixtape, “#10Day,” which he recorded during a 10-day suspension in high school. The mixtape gained popularity on music sharing sites and placed Bennett on Complex Magazine’s “10 New Chicago Rappers to Watch Out For.”

Bennett’s main success launched in the summer of 2013, after releasing his sophomore mixtape, “Acid Rap,” which received critical acclaim from Pitchfork, XXL, Spin and Rolling Stone. “Acid Rap” was also nominated for “Best Mixtape” at the 2013 BET Awards and garnered the No. 2 spot on Complex’s list of “The Best Albums of 2013 (So Far).”

Chance the Rapper has worked with many iconic artists, including Lil Wayne, Childish Gambino, Hoodie Allen, Ab-Soul and Action Bronson.

Tickets for Chance the Rapper will go on sale Friday, Sept. 27, at the Schine Student Center Box Office. Ticket sales are open to all SU and SUNY ESF students and faculty for $5.