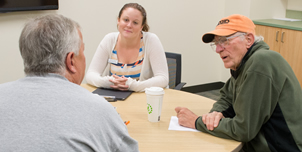 The Gebbie Clinic’s aphasia group is one of many beneficiaries of CSD’s new home. Aphasia is a neurological disorder, most commonly caused by stroke, resulting in problems with speaking, listening, reading and writing.

The Department of Communication Sciences and Disorders (CSD) in The College of Arts and Sciences has moved to 621 Skytop Road on South Campus. The new facility, which includes CSD’s Gebbie Speech-Language-Hearing Clinic, offers more than 14,000 square feet of academic, research and clinical space.

The move coincides with the 65th anniversary of CSD and the 40th anniversary of the Gebbie Clinic, the latter of which annually serves more than 3,900 clients, while providing a 24/7 laboratory for graduate-student clinicians. Both anniversaries, as well as the new building, will be celebrated in May 2014.

“This move is the realization of more than two decades of dreaming and planning,” says Linda Milosky, associate professor and chair of CSD. “It says a lot about the interest in our department and about the overall importance of speech, language and hearing wellness. We simply outgrew our space [in the Hoople Building] on South Crouse Avenue.”

Milosky credits Vice Chancellor and Provost Eric Spina and Arts and Sciences Dean George M. Langford for finding a workable solution to CSD’s longtime space needs. The result has been a yearlong, $1.7 million renovation of part of the Skytop building, leading to some 20 new clinical rooms; a large observation suite with computer monitors and a child therapy area; various therapy and testing rooms; two state-of-the-art sound booths for audiology testing; an electrophysiological testing area for infants; and a hearing-aid fitting room, which can be used to simulate real-world listening environments, such as crowds and noisy restaurants.

Other amenities include a cutting-edge video recording and observation system, enhanced network capability and free Wi-Fi, improved accessibility for the public and a drop-off zone leading to the Gebbie Clinic waiting area.

“We undertook this renovation to enhance the signature strengths of CSD on multiple levels,” says Spina. “Research and clinical practice are inextricably intertwined and mutually reinforcing for the faculty and students in this department. This space not only facilitates that synergy, but also enables them to elevate the role they have played for decades as a vital resource for community members.”

Adds Langford: “The move is not just a physical expression of CSD’s growth; it’s a reflection of their commitment to quality teaching, research, service and enterprise.” 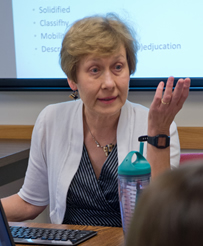 CSD grew out of the Department of Audiology and Speech Pathology, which SU established in 1946. The opening of the Hoople Building less than a decade later, along with that of the Gebbie Clinic in 1972, provided CSD with a physical home for more than four decades.

Originally, CSD was a program in the College of Visual and Performing Arts and then the School of Education. In 2002, it became a department in The College of Arts and Sciences. The switch to arts and sciences, says Milosky, was driven mainly by a growing trend among researchers to interact with not only clinicians, but also scholars from seemingly disparate fields, including psychology, biology, neuroscience and linguistics.

“Translational science is very important to us,” she adds. “Everything we do—in the clinic, the lab and the classroom—is interdisciplinary in scope and has a practical application in mind.”

Speech-language pathologists also see a spike in the number of young clients, many of whom grapple with language, articulation, fluency, swallowing and social communication challenges. “Fifteen to 20 percent of our population may experience a communication problem,” says Janet Ford, the Gebbie Speech-Language Clinic director and a professor of clinical practice. “Fortunately, we’re detecting these problems sooner in children and adults.”

CSD responds to these challenges in various ways. In addition to collaborating with SUNY Upstate Medical University and Crouse Hospital, the department boasts one of the top clinics of its kind in the region.

“The Gebbie Clinic is now located next to our research labs, so conversations about research and clients’ needs occur in ways that previously weren’t possible,” Milosky says. “Also, students can more easily gain experience in the lab, while honing their skills in the clinic, under the supervision of licensed speech-language pathologists and audiologists.”

On average, an SU student pursuing an M.S. degree in speech-language pathology will log 400-500 hours of supervised clinical practice; an audiology doctoral candidate will put in 2,000-3,000 hours. Moreover, students and faculty engage in educational and missionary work around the globe. This has been enhanced by telehealth—therapy delivered via the Internet and other telecommunications technologies—enabling some clients to receive services that are not readily available to them in their home communities.

The result is near 100-percent employment for CSD’s speech-language pathology and doctor of audiology graduates. “Our new space makes us better equipped to handle the challenges of and opportunities in the 21st century,” Milosky says. “The field is growing and so are we.”