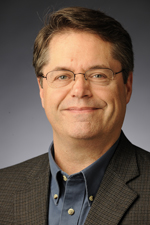 Evan Smith, professor of television, radio and film at the Newhouse School, is one of two professors to receive this year’s Teaching Excellence Award from the University Film & Video Association.

The award was established to recognize and reward “excellence in instruction, teaching and learning.” Smith was nominated by Professor Northrop Davis of the University of South Carolina and chosen by the award committee based on a submitted portfolio demonstrating teaching excellence, scholarly and creative achievement and service contributions.

Smith joined the Newhouse faculty after working in the television-film industry for 16 years. As a screenwriter, he wrote comedy and drama for Paramount, MTM, Fox, USA and other producers. Before that, he worked as a television development vice president in charge of TV movies, specials and series.

Smith is acclaimed for his screenwriting seminars (American Film Institute, Screenwriting EXPO, Learning Annex) and articles, and is the author of the bestselling book “Writing Television Sitcoms.” He also serves as a private script consultant for entertainment companies and screenwriters.

The award was presented on Aug. 3 at Chapman University in Orange, Calif.