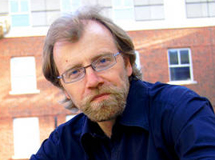 George Saunders G’88, one of this year’s most celebrated American writers, will kick off Syracuse University’s Fall 2013 Raymond Carver Reading Series at 5:30 p.m. Wednesday, Sept. 18, in Gifford Auditorium. A question-and-answer session will precede the reading from 3:45-4:30 p.m. The event is free and open to the public. Parking is available in SU’s paid lots.

“For people who pay close attention to the state of American fiction, [Saunders] has become a kind of superhero,” Joel Lovell wrote in a widely read New York Times Magazine January 2013 profile in advance of  Saunders’ “Tenth of December” (Random House, 2013). “If there exists a ‘writer’s writer,’ Saunders is the guy,” in the story, titled, “George Saunders Has Written the Best Book You’ll Read This Year.”

Saunders, who teaches in the Creative Writing Program in The College of Arts and Sciences, was chosen this spring for the 2013 PEN/Malamud Award, which recognizes the “body of work that demonstrates excellence in the art of short fiction.” The award honors the late writer Bernard Malamud. Saunders will read at the Folger Shakespeare Library in Washington, D.C., Friday, Dec. 6 as part of the award presentation.

On the heels of the Malamud Award, Saunders was named to the 2013 TIME 100, the magazine’s annual list of the 100 most influential people in the world. The 10-year-old list recognizes the activism, innovation and achievement of the world’s most influential individuals.

This summer,  Saunders’ May speech at The College of Arts and Sciences’ 2013 convocation ceremony, went viral. “Here’s something I know to be true, although it’s a little corny, and I don’t quite know what to do with it: What I regret most in my life are failures of kindness,” he said in the speech. His advice to the graduates: “Err in the direction of kindness.” Random House will publish “Congratulations, by the Way,” an expanded version of the speech as a book in spring 2014.

Saunders has won the National Magazine Award for fiction four times. In 2006, he was named both a MacArthur and Guggenheim fellow. His fiction and nonfiction has appeared in publications including The New Yorker, GQ, Harpers and Esquire. In addition to “Tenth of December,” his books include “CivilWarLand in Bad Decline” (Random House,1996), “In Persuasion Nation” (Riverhead Books, 2006),  “The Braindead Megaphone” (Riverhead Books, 2007), and “Pastoralia” (Riverhead, 2000).

In a February 2013 GChat with The Paris Review Daily, Saunders discussed his use of language. “Honestly—and this is where things get gauzy—so much of that process is intuitive. Just deciding minute-by-minute, over and over again, over the period during which you’re writing the story. Sort of like seasoning to taste or something like that,” he said. “I think that’s one of the maybe under-discussed aspects of process—the difference between a good writing day and a bad one is the quality of the split-second decisions you made. And that is dependent upon—well, who knows?”

A story in “The Braindead Megaphone” ends with words that could serve as Saunders’ advice for how to write or how to live. “Don’t be afraid to be confused. Try to remain permanently confused,” Saunders wrote. “Anything is possible. Stay open, forever, so open it hurts, and then open up some more, until the day you die, world without end, amen.”

Fall 2013 Series Schedule
The series will continue with the following authors. All readings begin at 5:30 p.m. in Gifford Auditorium. Question-and-answer sessions are from 3:45 to 4:30 p.m. Further information is available by calling 315-443-2174.

Oct. 9: Etgar Keret, a popular Israeli writer of short stories whose work has appeared in publications including The New York Times, Le Monde, The Guardian, and The Paris Review; among his books is “Four Stories” (Syracuse University Press, 2010) and “Suddenly a Knock on the Door: Stories” (FSG, 2012).

Oct. 16: David Baker, a poet whose books include “Never-Ending Birds” (W.W. Norton, 2009) and “Talk Poetry, Poems and Interviews with Nine American Poets” (University of Arkansas Press, 2012). He is also the poetry editor of The Kenyon Review.