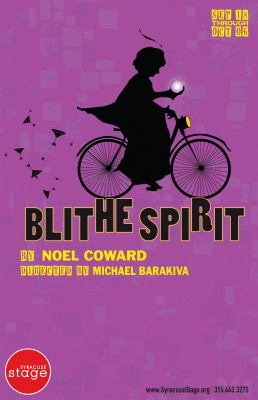 In the 1941 hilariously haunting tale “Blithe Spirit,” novelist Charles Condomine enlists the delightfully eccentric Madame Arcati to hold a séance at his home, hoping to raise some ideas for a new book. Instead, she raises the ghost of his late wife, Elvira, who is determined to wreak havoc on Charles’ current marriage to Ruth.

Recently revived on Broadway, “Blithe Spirit” is one of Coward’s most sparkling comedies. Directing the Syracuse Stage production is Michael Barakiva, who previously directed “The Clean House” and “The Turn of the Screw” at Syracuse Stage.

“Blithe Spirit” will run Sept. 18-Oct. 6 in the Archbold Theatre at the Syracuse Stage/SU Drama Theatre Complex. The show is appropriate for general audiences. Tickets can be purchased several ways:

On select performance dates, Syracuse Stage will host a number of pre- and post-show events, including the Opening Night Party (Sept. 20, with live music by Brian Alexander), Happy Hour (Sept. 26, with wine tasting from Owera Vineyard and snacks from Dolce Vita), an Actor Talkback (following the 7 p.m. show on Sept. 29), Wednesday @ 1 Lecture (Sept. 25, with SU Professor Alan Allport), and Prologues (moderated discussions with actors from the show on Sept. 22, Sept. 28 and Oct. 3). Visit Syracuse Stage Events for more info.

Continuing its seasonal partnership with Syracuse Stage, the Onondaga Historical Association will install an exhibition titled “Ghostly Legends & Haunted Happenings of Onondaga County.” Available for viewing in the Coyne Lobby throughout the run of “Blithe Spirit,” the panel exhibition will explore some of the most noted local ghost stories, including the spooky spirit of Cedarvale Road’s 13 Curves, the apparitions in the corridors of the Landmark Theatre, the mysterious happenings in Elbridge’s Wayside Inn, the legend of a haunted bridge in Jamesville and Syracuse Stage’s own resident ghost, the “Lady in Red,” among others.

After his London office and home were destroyed in the Blitz in 1941, English playwright Coward wrote “Blithe Spirit” in just six days. During rehearsals, only two lines from the play were dropped and none were altered in what Coward called “An Improbable Farce in Three Acts.” Six weeks later, it opened in London’s Piccadilly Theatre on July 2, 1941, and premiered on Broadway at the Morosco Theatre on Nov. 5, 1941 (http://broadway.com). Coward sensed that a comedy about death would resonate well with an audience who were, in real life, attempting to create a life in a city under constant attack and the threat of death (Stratford Festival).

CBS Radio describes “Blithe Spirit” as “loaded with fast-talking, intelligent humor, intrigue, mystery, cool staging and fun special effects.” The dialogue is “a hilarious cardiovascular exercise in proper ‘King’s English’ vernacular,” with a fast moving script that never lets you rest and gets funnier as the show goes on.

The Associated Press calls “Blithe Spirit” “champagne bubbles of witty conversation” and Bloomberg describes it as “a scintillating comedy.”