The Office of Multicultural Affairs within the Division of Student Affairs hosts Latino/Hispanic Heritage Month from Sept. 15-Oct. 15. With lectures, performances, luncheons, semi-formals and art exhibitions, Latino/Hispanic Heritage Month provides the campus and local community with a wonderful opportunity to reflect on, learn about and experience the deep, rich traditions of Latino culture. 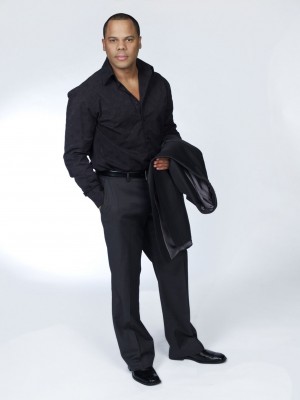 Raul Acosta is the lead singer of Oro Solido.

The celebratory month honors the cultures and traditions of U.S. residents who trace their roots back to Spain, Mexico and the Spanish-speaking nations of Central America, South America and the Caribbean. It begins on Sept. 15, as this is the anniversary of independence for five Latin American countries: Costa Rica, El Salvador, Guatemala, Honduras and Nicaragua. Mexico and Chile celebrate their independence days on Sept. 16 and 18, respectively.

“The beautiful thing about Latino/Hispanic Heritage Month is the opportunity to delve more deeply into the history of our ancestors and help create an intimate knowledge of the role that Latinos and Hispanics have played in U.S. history, as well as the effect we have had and continue to have in American culture,” says Valerie Martinez, associate director in the Office of Multicultural Affairs and chair of the Latino/Hispanic Heritage Month committee. “We are very excited for this year’s events and are looking forward to bringing Syracuse University la cultura Latina.”

One of the most highly anticipated events of the month, Fiesta Latina, will take place on Saturday, Oct. 5, at 7 p.m. (doors open at 6:30 p.m.) at Drumlins Country Club. Transportation will be provided to and from Drumlins, with pickup and dropoff locations at the Schine and Goldstein student centers. This year, Fiesta Latina will feature merengue sensation Oro Solido. Admission is $10 for the general public; $5 for faculty, staff and alumni with SU ID; and $3 for all college students, including SU students.

Oro Solido—or Solid Gold, in English—is a New York-based music group formed in 1994 by Raul Acosta. Acosta originally began his music education at a local music studio in New Jersey after moving to the United States from the Dominican Republic with his family as a child. Following the release of their self-titled album in 1994, Oro Solido broke through to the English-speaking world with hit singles like “Ta Cache,” performing more than five times in Madison Square Garden. Oro Solido has also performed alongside acts such as 50 Cent, Marc Anthony, LeAnn Rimes and the Temptations.

“With an increase in Latino and Hispanic populations within Central New York, I am very happy to see that a greater percentage of our programs for Latino/Hispanic Heritage Month will be taking place in the community,” says James K. Duah-Agyeman, director for the Office of Multicultural Affairs. “As we work toward a more inclusive campus climate, it is important that we foster relationships with those closest to us—the local community.”

Campus and community members are encouraged to participate in this month’s planned events. A calendar of events is available at OMA, located in 105 Schine Student Center. Join the conversation on Facebook at www.facebook.com/multicultural.syr.edu. For more information, contact Martinez at 315-443-9676 or vjmart01@syr.edu.