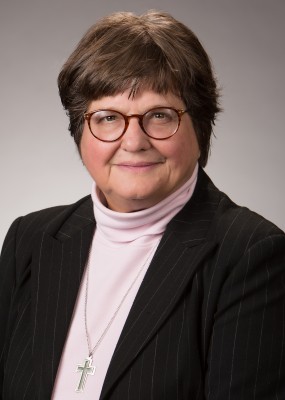 Sister Helen Prejean, a Roman Catholic nun who is a leading voice for the abolition of the death penalty, will present the 2013 Joseph and Amelia Borgognoni Lecture at 7 p.m. Monday, Oct. 7, in Maxwell Auditorium.

Titled “Dead Man Walking: The Journey Continues,” the event is presented by the Department of Religion in The College of Arts and Sciences. A reception will follow the lecture. The lecture is free and open to the public. Paid parking is available in the Irving Garage.

Prejean’s international best-selling book, “Dead Man Walking: An Eyewitness Account of the Death Penalty in the United States” (Random House, 1993), became a movie, an opera and a play for high schools and colleges. It has also provided an important starting point for discussion of the complex, interconnected issues related to the death penalty: race, poverty, education, morality, religion and justice. “Dead Man Walking” and another published work by Prejean, “Death of Innocents: An Eyewitness Account of Wrongful Executions,” will be available for purchase at the lecture.

Prejean is a member of the Congregation of St. Joseph. Her work with the poor in New Orleans in the 1980s led to a request to correspond with an inmate on death row at Angola—the Louisiana State Penitentiary known as the “Alcatraz of the South.” Prejean soon became spiritual adviser to Patrick Sonnier, who had been convicted of rape and murder. She witnessed his April 5, 1984, execution in the electric chair. Her account of her relationship with Sonnier and another death row inmate, Robert Lee Willie, spurred her nonfiction account.

In a 1993 interview with the New York Times Magazine, Prejean acknowledged her mixed feelings of appearing more concerned with killers than victims. “I do have guilt toward these families, knowing I’m befriending the person who killed their child,” she said. “But I don’t feel guilty for having compassion for people who are condemned to death for killing other people.”

That review praised Prejean’s unsparing description of men on death row. “She doesn’t suppose their innocence, doesn’t appeal to the possibility that somehow they are there by mistake,” the reviewer wrote. “She embraces their guilt, and from that embrace argues that ‘people are more than the worst thing they have ever done in their life.’”

Random House recently released the 20th anniversary edition of “Dead Man Walking” with a new foreword and afterword. Sarandon described her initial reaction to Prejean’s book in the new afterword. “It galvanized me,” she wrote. “When I finished, I was beginning to envision a new way—a deeper way—of making a film about the death penalty, one that could help people reflect on the issue more profoundly than other films have done.”

Prejean is also the author of “The Death of Innocents: An Eyewitness Account of Wrongful Executions (Random House, 2004). In this book, she tells the story of two men she accompanied to their executions; she believes both were innocent.

She is currently at work on “River of Fire: My Spiritual Journey,” a prequel to “Dead Man Walking.” “It’s about my spiritual journey, how this nice, polite nun came to a new understanding of Christianity and the need to fight for social justice,” Prejean told USA Today in June.

The Borgognoni Lecture is made possible by the late Monsignor Charles L. Borgognoni (aka Father Charles), longtime Roman Catholic chaplain of the St. Thomas More Campus Ministry. Before his death in 2007, Monsignor Borgognoni established a fund in memory of his parents, Joseph and Amelia, to promote the study of Catholic theology and religion in society at Syracuse University.

For more information about the Borgognoni Fund, contact Karen Weiss Jones at 315-443-2028 or kmweissj@syr.edu.