Call to Action for NYC Orange Alums on GMA 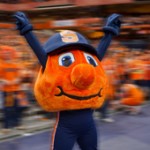 A chance to show your SU pride to the entire nation is coming this week as part of “Good Morning America’s” College Week. GMA is setting aside time to highlight colleges with the most school pride. If you’re part of Orange Nation and will be in the New York City area, you can show up outside ABC’s studios in Times Square between 7 a.m. and 9 a.m. this week wearing your SU gear. We’re hoping to rally Orange Nation and flood Times Square with SU pride on Friday, Sept. 13. Bring your signs, hats and all the SU gear you can carry! While there, use #SUonGMAU on your social media posts, giving everyone on campus a chance to follow along as you show America what it means to be part of Orange Nation. Go Orange!