Haudenosaunee oral history and South Asian folk art are the themes of this year’s Ray Smith symposia, sponsored by The College of Arts and Sciences.

The Onondaga Historical Association (OHA), in association with SU, Le Moyne College, Onondaga Community College, and Skä-noñh—Great Law of Peace Center, will present a conference titled “Listening to the Wampum,” Nov. 14-15. The program will focus on the Remembrance Belt, a sacred wampum depicting the history of contact between French Jesuits and the Onondaga Nation in Central New York in the 1650s. It includes a rare reading of the wampum, following by a series of scholarly discussions.

The SU South Asia Center, located in the Maxwell School’s Moynihan Institute for Global Affairs, will present a forum titled “Transformations in South Asian Folk Arts, Aesthetics, and Commodities,” Feb. 27-March 1, 2014. The program will highlight art from the Mithila region of northern India and will play host to more than a dozen international scholars and artists. “Transformations” is held in conjunction with Cornell University’s South Asia Program, part of the Cornell-SU South Asia National Resource Center.

Both symposia are enabled by a major bequest from the estate of Ray W. Smith ’21, administered by The College of Arts and Sciences. All events are free and open to the public. For more information, call the college’s Office of Curriculum, Instruction and Programs at 315-443-1414.

“The Ray Smith Symposium exemplifies the college’s commitment to public humanities scholarship,” says Gerald R. Greenberg, senior associate dean for academic affairs; the humanities; and curriculum, instruction and programs. “Each symposium not only showcases diverse traditions and methods of critical inquiry, but also fosters creativity and tolerance. It’s these kinds of interdisciplinary discourses that teach us more about who we are, individually and collectively.”

Listening to the Wampum 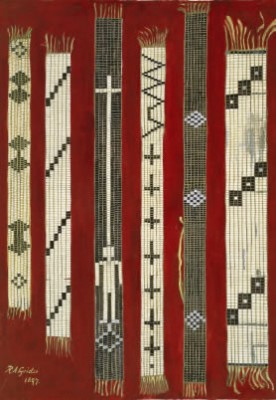 The Remembrance Belt (third from left) depicts the history of contact between French Jesuits and the Onondaga Nation in the 1650s.

Perhaps no chapter of local history is more important—or hotly contested—than that involving contact between Jesuit missionaries and the Onondaga in 1653 and 1657-58. Much of it is recounted in Jesuit Relations, a collection of ethnographic documents chronicling their missions in the New World.

Event co-organizer Philip Arnold says the conference is designed to give the Onondaga a chance to tell their side of the story. At stake is the issue of whether or not they denied the Jesuits’ request to join the Catholic faith.

“Listening to the Wampum” is presented as part of Native American Heritage Month and Syracuse Symposium, the theme of which this fall is “Listening.” The schedule includes panel discussions at SU, Le Moyne, OCC and Skä-noñh, a new Haudenosaunee heritage facility on the eastern shore of Onondaga Lake.

Guest speakers include the following:

• Davíd Carrasco, the Neil L. Rudenstine Professor of the Study of Latin America at Harvard University;

• Robert Sculley, professor and chair of history at Le Moyne; and

• Irving Powless Jr. H’09, a chief of the Onondaga Nation.

Made from various mollusk shells, wampum has been used by the Haudenosaunee for more than a millennium. Wampum is woven into belts and strings, and its colorful beads are used to commemorate exchanges, agreements and treaties.

“Our goal is to foster a constructive dialogue about the past, in hopes of encouraging a better understanding of modern-day issues related to indigenous and colonial cultural contact,” says Arnold, associate professor of religion at SU and founding director of Skä-noñh. “This conference will also help formulate an interpretive blueprint for Skä-noñh.”

The Onondaga, along with the Mohawk, Oneida, Cayuga, Seneca and Tuscarora nations, comprise the Haudenosaunee Confederacy. 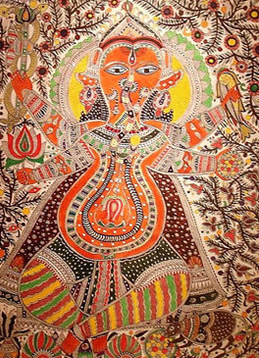 “Transformations” features an array of art-related lectures, panel discussions, workshops and exhibitions. Its emphasis is on Mithila paintings, a type of Indian folk art created by women in Madhubani, Bihar and the adjoining regions of Nepal.

The symposium will coincide with several other projects, including the exhibition “Mithila Painting: The Evolution of an Art Forum,” running Jan. 30-March 16, 2014, at SUArt Galleries; the Feb. 28 premiere of the documentary “Likhiya: Writing Stories With Mithila Art,” produced by Susan Wadley and Tula Goenka, co-directors of the SU South Asia Center; and four related academic courses.

Guest presenters include the following:

• Coralynn Davis, associate professor of women’s and gender studies and of anthropology at Bucknell University;

• Nora Fisher, curator emerita of textiles and costumes at the Museum of International Folk Art in Santa Fe, N.M.;

• Pika Ghosh, associate professor of art at the University of North Carolina at Chapel Hill;

• Kajri Jain, associate professor of Indian visual culture and contemporary art at the University of Toronto in Mississauga;

• Frank Korom, professor of religion and anthropology at Boston University;

• David Szanton, co-founder and president of The Ethnic Arts Foundation (sponsor of the “Mithila Painting” traveling exhibition) and former executive director of international and area studies at the University of California; and

• Peter Zirnis, a curator and photographer of Mithila art, as well as an EAF board member.

In conjunction with the symposium, Rani Jha, a master painter/teacher at the Mithila Art Institute in Madhubani (India), will spend two weeks at SU, conducting workshops and discussing her paintings. A feminist from rural India, she uses her artwork to raise awareness of social justice issues for women.

“She not only wants to tell their stories, but also hopes that her paintings may have some small effect in changing the social conditions for  all Indian women,” says Zirnis.

Born into a conservative Brahmin family, in which girls traditionally receive little or no education, Jha fought against tradition and went to school. In 2010, she earned a Ph.D. in Maithili folk traditions from the University of Darbhanga (India). To schedule a personal appointment or class visit with Jha, contact Emera Bridger Wilson at 315-443-2553 or elbridge@syr.edu.

In conjunction with the “Mithila Paintings” exhibition, the symposium will showcase some of the 80-plus contemporary Mithila paintings that Wadley and H. Daniel Smith, professor emeritus of religion at SU, have donated to SUArt Galleries.

Other SU treasures include Smith’s poster archive, featuring more than 3,500 mass-produced color prints of Hindu gods, goddesses, saints and sacred sites; and the Ruth Reeves Collection, which contains more than 400 pieces of South Asia folk objects from the past 50 years.

“Our goal is to unpack questions about local identity, the pressures of global consumerism and transnationalism, and the troublesome divisions between arts and crafts that these objects raise,” says Wadley, the Ford-Maxwell Professor of South Asian Studies.

“One of the key concepts underlying the exhibition and the symposium is whether or not Milthila painting is ‘craft,’ ‘folk art’ or ‘fine art.’ We want to break down the barriers between these distinctions,” says Goenka, associate professor of television-radio-film in the Newhouse School.

Wadley and co-organizer Romita Ray think the symposium is timely because of the commodification of South Asian folk art. They say the success of folk art in the marketplace is dependent on advice and guidance from intermediaries (government and non-government organizations) about what buyers want. Moreover, technology has changed the way art is made and reproduced.

“All of the traditions explored in this symposium face these issues of commodification and marketplace,” adds Ray, associate professor of art and music histories in The College of Arts and Sciences.

Long the domain of upper-caste women, Mithila artwork is known for its vibrant color and eye-catching geometrical shapes. Originally, these paintings consisted of murals, which adorned the inner walls of courtyards and houses and depicted gods and goddesses, deity symbols and daily life. But when Mithila paintings were introduced to the outside world in the 1930s, they underwent changes related to commodification, style and content.

“Today, women of all ages use this once ritual tradition to comment on social issues facing them in their region, including marriage, dowry deaths and female infanticide. It’s also used to celebrate women’s accomplishments and goals,” says Wadley, alluding to a Mithila painting of Indian and Pakistani women playing cricket, something virtually unheard of 40 years ago.