Nathan Woods ’14 has something to share with the young people he mentors and advocates for at the Southwest Community Center in Syracuse. 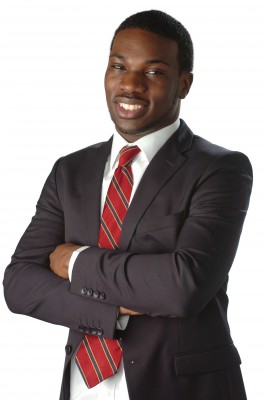 As a first-generation college student who grew up in a struggling urban area, Woods knows the challenges that young people can face as they seek to better themselves. “I get to be the example of someone who came from the inner city—Washington, D.C.—and is at Syracuse now, and how anything is possible if you have a dream and you put your mind to it,” Woods says.

Woods has volunteered at the center, which provides community programming in the areas of youth, family and health, since last year as part of a program that shows youngsters the possibilities. “We take them on field trips and we talk about what it means to be a success—how your zip code should not dictate your success, you should dictate your success,” Woods says. “We talk about a lot of things, but it’s more like advocacy work and counseling in a way.”

Woods, who is majoring in political science and child and family policy studies in The College of Arts and Sciences and the Falk College of Sport and Human Dynamics, is taking his passion for advocacy work into a plan for his future. To fit with his aspirations, he petitioned to take on child and family policy studies, typically a minor, as his second major. Once he graduates, he hopes to get a J.D. degree, gain some experience at a nonprofit and then start his own nonprofit or legal firm to advocate for juveniles.

“Juveniles need more support and more people on their side, protecting their rights and guiding them through life,” Woods says. “It really puts into perspective the need when I hear so many stories about what these kids are going through daily—what I’ve been through, what my siblings and what my friends have been through—it just makes me want to work faster to do whatever I need to do to get me there.”

Woods started his own path to college in grade school when he enrolled in the Knowledge Is Power Program (KIPP), a network of free open-enrollment college-preparatory schools in under-resourced communities throughout the United States. SU is one of several universities that KIPP partners with to recruit and support KIPP students.

“My mom loved the school and the message of going to college; something that wasn’t very common with the D.C. public schools,” Woods says.

After attending the KIPP school in Washington, D.C., Woods enrolled in a private boarding school in Virginia. When it came time to decide on college, Woods choose SU over several other schools. “The biggest factor was SU’s diverse community; it was something I was used to in high school, and something I wanted to continue in college,” Wood says.

The first time he stepped foot on campus was his fall semester first year. “It was a leap of faith,” he says. He was surprised by size of the City of Syracuse compared to his hometown, but he’s never regretted his decision. “I became involved with the campus and I met a lot of awesome people from all over the world,” he says.

Woods has been on the University Conduct Board (formerly the judicial board) since his first year and is currently the board chair, and is also director of diversity initiatives for Sex S.Y.M.B.A.L.S., a student group that educates other students on sexual health and conscientious decision-making.

Woods also found his voice—and more—as a member of the Black Celestial Choral Ensemble. “It’s people who have a passion for spreading the word of Christ and it’s helped me throughout my journey here,” Woods says. “I’ve been through a lot of stress as a first-generation college student that my family couldn’t necessarily help me out with. My BCCE family helped me through those challenges. It’s more than a choir to me; it’s my sanctuary while I’m here.”

With all of his experiences and his background as a KIPP student, Woods was named an SU KIPP ambassador. Among other responsibilities, he helps other KIPP students prepare for internships, organizes resume workshops and finds opportunities on campus to support the students. For example, working with Dean of Admissions Maurice Harris, Woods is looking to pinpoint certain people on campus, such as in financial aid and SU Library, who can be a direct source of information to KIPP students. “It’s my job to bridge the gap between the KIPP students on campus, SU and the KIPP foundation, which oversees all the KIPP schools,” Wood says.

As he begins his senior year, Woods hopes to continue making connections with people across campus and concentrate on his studies, but also to enjoy all that the University offers. “This is my home for four years and it’s going to be a part of me for the rest of my life,” Woods says. “I just want to soak it all in.”