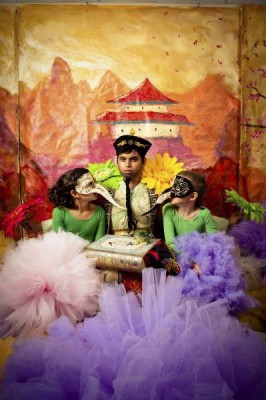 Discussing the director’s work, Shirley Novak, board director of the Syracuse Center for Peace & Social Justice, says, “José Miguel Hernández Hurtado does not believe in ‘limits’…  One theater production is more spectacular than the last, and through words and modeling, he encourages the youth of La Joven Guardia to reach beyond what anyone ever thought possible.”

“Los Dos Ruiseñores” explores legend of a Chinese emperor and his palace made of the finest blue porcelain and populated by mandarin functionaries. The story highlights the importance of love, valuing and respecting nature, and thinking and living in freedom. The play is an adaptation by Hernández Hurtado of the story by Cuban national hero and important figure in Latin American literature José Martí.

The award-winning troupe performs completely in Spanish, and has been performing in Central New York for almost 15 years. Syracuse University’s Falk College Professor of Social Work, Alejandro García, says of the progression of the student participants, “He (Hernández Hurtado) has taken children and adolescents from low-income groups with no acting experience and has created fine works of art.  He has not only taught children how to act, but also how to succeed in society.”

Hernández Hurtado is originally from Cuba and has lived in Syracuse for 16 years. He has a theater degree from the Teatro Estudio. In 1999, he founded the Spanish Action League’s theater troupe.

Punto de Contacto-Point of Contact, a New York-Buenos Aires-based arts organization in residence at Syracuse University, co-produces this program that began as a project of its art education program, El Punto Art Studio. The stage design and backdrop for this play were made by children who participated in the program last spring under the direction of three local Latino artists: Juan Cruz, Oscar Garcés and Abisay Puentes.