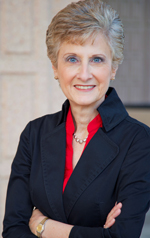 In an entertainment career spanning more than 25 years, Howard was executive vice president for Sydney Pollack’s Mirage Productions, and then for Mark Rosenberg and Paula Weinstein’s Spring Creek Productions. Her entertainment career culminated with her role as president of Spring Creek Television, where she served as executive producer on HBO’s film about the woman’s suffrage movement, “Iron Jawed Angels,” starring Hilary Swank and Angelica Huston. The movie was nominated for Emmy, Golden Globe and Humanitas awards.

When asked about the connection between filmmaking and her new position as the director for the SULA Semester, Howard notes, “The producer on a movie has to start with an overall creative vision for a project and then provide the leadership necessary to  execute that vision. Running  the  SULA  Semester requires those same skills. Our vision for the SULA Semester is to produce students who excel academically and who are committed to the highest level of professional and social engagement. We work closely with everyone on campus to execute that vision every day.”

A native of Brooklyn, Howard received a master’s degree from SU, where she attended the S.I. Newhouse School of Public Communications on a teaching fellowship. She moved to Los Angeles in 1976 to begin her entertainment career. In recent years, Howard has worked as an adjunct professor for SULA Semester.

“The time I spent in Syracuse opened the door to the world of possibilities, and gave me the courage to drive across the country to L.A. with little money and no contacts,” Howard says. “Syracuse will always be in my heart, and that’s why I welcomed the opportunity to teach for the newly formed SULA Semester program four years ago. To now step into the director’s position is a real honor. I’m very excited to be able to give back to the school that gave me so much.”

Newhouse School Dean Lorraine Branham says, “I really feel that we hit the trifecta with Robin. First, she’s an alumna of the Newhouse School and has deep affection for her alma mater. Secondly, she is also a wonderful teacher who understands the program because she’s been involved since its inception. The students love her and she has gotten high marks from those who have come through the program. Lastly, she has an impressive professional background and extensive industry contacts, which will serve our students well. She’s a wonderful addition to SULA Semester, and will build upon the program’s success in a way that will take us to the next level.”

When asked about the unique opportunities that the SULA Semester experience offers, Howard adds, “During their internships the students interact with some of the top professionals in the industry. The students also have the opportunity to meet one-on-one with many other accomplished professionals who participate in the semester as guest speakers during academic classes and hosts of special events.

“Our students have interacted with numerous high-profile alumni, including Aaron Sorkin, Rob Light, Jason Blumenthal, Doug Robinson, Brian Frons and Diane Nelson. Our professors have had long and illustrious careers in the entertainment industry, and bring to class a variety of practical and professional experiences. The students also have the opportunity to try their hand at living and working in Los Angeles with the safety net of having a support system in place to help them.”