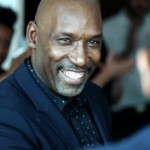 Distinguished bass Gregory Sheppard will return to Syracuse on Sunday, Sept. 29, to present the recital “Songs Patti Taught Me” in honor of soprano Patti Thompson-Buechner, his teacher, friend and mentor. Sheppard, a 2000 graduate of SU’s Rose, Jules R. and Stanford S. Setnor School of Music in the College of Visual and Performing Arts, credits Thompson-Buechner, a Setnor faculty member, for introducing him to opera and for her years of support, advice and friendship.

The recital will be held at 3 p.m. at St. Stephen Lutheran Church, 876 Dewitt St., Syracuse. It is open to the public.

Sheppard’s performance coincides with a vocal award he is establishing in Thompson-Buechner’s name at the Setnor School. In lieu of an admission charge, contributions will be accepted for the award at the performance or by mail. Checks should be made payable to Syracuse University and include the designation “Patti Thompson-Buechner Vocal Award.” Contributions by mail should be addressed to Jeffry Comanici, College of Visual and Performing Arts, Syracuse University, 204 Crouse College, Syracuse, N.Y., 13244. Questions about the award may be directed to Comanici at 315-443-9727 or jjcomani@syr.edu.