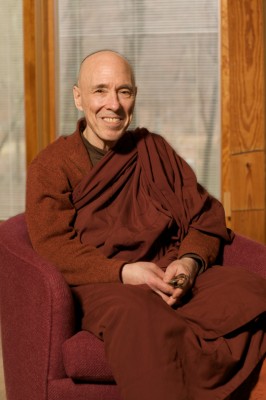 The Venerable Bhikkhu Bodhi, one of the United States’ most renowned Buddhist monks, is making a rare appearance at Syracuse University. He will present the Syracuse Symposium  event “Engaged Buddhism: Listening and Responding to World Hunger” on Monday, Sept. 16, at 5:30 p.m. in Hendricks Chapel, and will lead an SU Humanities Center-Mini Seminar on Tuesday, Sept. 17, at 9 a.m. in Room 304 of the Tolley Humanities Building.

Information about various hunger relief efforts will be available in the lobby of the Heroy Geology Laboratory on Sept. 16, starting at 4 p.m. A brief reception will take place in the lobby after the Monday lecture. Everything is free and open to the public except for the HC Mini Seminar, which is by invitation only. For more information, call 315-443-2901.

SU Buddhist Chaplain Bonnie Shoultz sees Bhikkhu Bodhi’s visit as a continuation of last fall’s “Common Ground for Peace” program, which included a public talk by the Dalai Lama and was organized, in part, by the SU Humanities Center.

“His Holiness reminded us to engage in acts of compassion and kindness that might create change,” says Shoultz, who also is the head monastic at the Zen Center of Syracuse, under the leadership of Sherry Chayat, abbot. “This special visit by Bhikkhu Bodhi offers an opportunity to expand on that notion, exploring ways in which engaged listening can move people to acts of compassion, particularly as they relate to world hunger. His lecture frames listening as a call and response.”

Bhikkhu Bodhi is founder of Buddhist Global Relief (BGR), an interdenominational organization that promotes food productivity at the grass-roots level.

“When we first began planning Bhikkhu Bodhi’s visit, we realized that there are acute needs right here in Central New York that are not being met, despite great efforts by the organizations responding to hunger,” says Chayat.“What better way to honor this man of great compassion than to form a collaborative response to hunger in our own backyard?”

With that in mind, Chayat met with representatives from a wide range of community partners, including the Alliance of Communities Transforming Syracuse (ACTS), SU’s Hendricks Chapel, InterFaith Works of Central New York, the Interreligious Food Consortium, the Food Bank of Central New York and the Community Folk Art Center.

New information on what ACTS has been working on was shared with the group. “We identified that a planning and coordination gap existed in the area of food and hunger issues, which led to the idea of the Food Policy Network,” says Robin Braunstein, co-director of the ACTS Food Access Task Force.

ACTS has submitted grants to create this network, which will be a separate entity under the auspices of ACTS, and will have a steering committee made up of growers, distributors, academics from local institutions, ACTS members, consumers and others. Its mission is to address how changes can be made to the system to improve the health of all Central New Yorkers. Annual food summits to discuss progress and to identify and prioritize issues for the future are planned, as well as a corner store initiative to increase the amount and types of healthy foods available in the poorest areas of Onondaga County.

“Throughout the spring ACTS Food Access Task Force members researched successful programs across the country and began to identify key players to initiate such a program locally,” says Braunstein. “This summer, we are finalizing the stores we will begin with, the services we will offer and the evaluation methods we will be using to determine the benefits of the project. We are planning to kick off the project in September.”

Chayat says that the local initiatives will mirror Bhikkhu Bodhi’s Buddhist Global Relief initiative. “Working together in a coalition that includes all current efforts as well as some new approaches, the whole will be greater than the sum of the parts,” she says. “We can realize our dream to wipe out hunger in Syracuse.”

Bhikkhu Bodhi, who teaches at Chuang Yen Monastery in Carmel, N.Y., and at Bodhi Monastery in Lafayette Township, N.J., writes: “Buddhism teaches that hunger is a source of acute pain and a barrier to spiritual growth. BGR seeks to remove that barrier and thereby give others the chance to live healthy lives of dignity and purpose. Recognizing that all human beings share a common desire for happiness, we lend a helping hand to our unseen brothers and sisters across the globe, enabling them to fulfill great dreams and tap unrealized potentials.”

BGR has partnered with major international relief agencies for projects in more than a dozen countries, including Cambodia, Haiti, India, Kenya, Niger, Vietnam and the United States.

In 2000, Bhikkhu Bodhi delivered the keynote address at the United Nations on the first official celebration of Vesak, a holy day commemorating the birth, enlightenment and death of the Buddha. He has resided in the United States since 2002.

Born in Brooklyn, Bhikkhu Bodhi earned a Ph.D. in philosophy from Claremont Graduate University and then spent more than 22 years in Sri Lanka, where he was ordained by the Venerable Balangoda Ananda Maitreya, an eminent scholar-monk in the Theravada tradition. (Theravada Buddhism stresses the attainment of nirvana through meditation and monastic discipline. In addition to Sri Lanka, it is practiced throughout Cambodia, Laos, Thailand and Myanmar).

Bhikkhu Bodhi’s visit is sponsored by the Humanities Center, Hendricks Chapel, the South Asia Center and the Department of Religion in The College of Arts and Sciences and the David B. Falk College of Sport and Human Dynamics, in cooperation with the Zen Center of Syracuse, the CNY Medicine Buddha Prayer Sangha, InterFaith Works of Central New York and the SU Student Buddhist Association in the Division of Student Affairs.