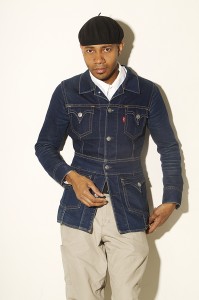 Composer and multimedia artist DJ Spooky: That Subliminal Kid (aka Paul D. Miller), artist-in-residence at the Metropolitan Museum of Art, will present the world premiere of a multimedia “Happening” as part of CRAVE, a two-day interactive arts festival playing out across Syracuse’s Connective Corridor.

DJ Spooky headlines the CRAVE festival with a performance Saturday, Sept. 21, at 8 p.m. in Goldstein Auditorium in Syracuse University’s Schine Student Center. General single admission tickets for the “Happening” are priced at $22 and are now on sale at the Schine Box Office (http://www.boxoffice.syr.edu/content/tickets.html).

This concert is the first and only appearance scheduled for DJ Spooky in Upstate New York this year. “I’m thankful that a cutting-edge DJ performance artist will lend his talents to our arts immersion festival,” says CRAVE organizer Larry Luttinger. “His legendary skills cross many boundaries, and this unique ‘happening’ will feature his greatest hits with a few surprises thrown in.”

DJ Spooky will also give a free public lecture on digital functionality and its useful relationship to presenting art on Friday, Sept. 20, at 2:30 p.m. in the auditorium of SU’s Life Sciences Complex. The lecture is part of the 2013 Syracuse Symposium, which focuses on “Listening” as a mode of cognition that engages both our mind and senses. Directions and parking for the Friday lecture are available at http://syracusesymposium.org.

Miller is the executive editor of Origin Magazine and is a composer, multimedia artist, editor and author. His DJ MIXER iPad app has seen more than 12 million downloads in the last year. He has produced and composed work for Yoko Ono, Thurston Moore and scores of artists and award-winning films. Miller’s work as a media artist has appeared in the Whitney Biennial; the Venice Biennial for Architecture, the Ludwig Museum in Cologne, Germany; Kunsthalle, Vienna; the Andy Warhol Museum in Pittsburgh and many other museums and galleries. He is the author of the best seller “Sound Unbound” (MIT Press, 2008), an anthology of writings on electronic music and digital media, and has been featured everywhere from Elle to CNN to SyFy.

Miller’s deep interest in reggae and dub has resulted in a series of compilations, remixes and collections of material from the vaults of the legendary Jamaican label Trojan Records. Among his other releases are “Optometry” (2002) and “Dubtometry” (2003). His “Rebirth of a Nation” was commissioned in 2004 by the Lincoln Center Festival, Spoleto Festival USA, Weiner Festwochen and the Festival d’Automne a Paris. It was his first large-scale multimedia performance piece and has been performed more than 50 times in venues around the world.
Miller’s multimedia performance piece “Terra Nova: Sinfonia Antarctica” was commissioned by BAM for the 2009 Next Wave Festival. Performed by a piano quartet, with video projections and a score composed by Miller, “Terra Nova: Sinfonia Antarctica” is a portrait of a rapidly transforming continent. He also collaborated on “The Nauru Elegies: A Portrait in Sound and Hypsographic Architecture,” a collaboration with artist/architect Annie Kwon.

In 2011, Miller released a graphic design project exploring the impact of climate change on Antarctica through the prism of digital media and contemporary music compositions that explored the idea of “acoustic portraits” of Antarctica titled “The Book of Ice” (Thames and Hudson/Mark Batty Publisher). He is currently a contributing editor to C-Theory.

A complete schedule, a map to the more than two dozen CRAVE event locations, a special Connective Corridor bus schedule and a complete list of event descriptions are downloadable at http://www.CRAVEfest.org.