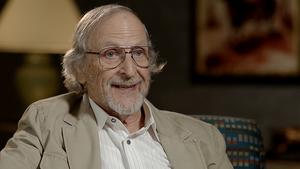 Emeritus professor of economics A. Dale Tussing was a graduate student working on his dissertation at Syracuse University in 1963 when he stepped onto a bus to Washington, D.C., and into an experience of a lifetime.

Tussing and a friend from SU boarded the bus for the March on Washington for Jobs and Freedom on Wednesday, Aug. 28, 1963—50 years ago this week.

“For me and my friend, it was the door that opened that got us involved in the Civil Rights Movement, which was a deep involvement, for as long as the Civil Rights Movement persisted,” Tussing says. “For most of us, who got involved in that way, it was a life-changing event; up until then we felt strongly about the need for progress in civil rights but didn’t know how to get involved.”

His involvement began with hearing about the bus that was heading to the U.S. capital. The march, which included Martin Luther King, Jr., and his famous “I Have a Dream Speech,” drew 250,000 people and was a landmark in civil rights that brought about the 1964 Civil Rights Act and the 1965 Voting Rights Act.

“The march didn’t kick off the Civil Rights Movement; it had been going for a while. It gave a national focus to the movement that couldn’t be ignored,” Tussing says. “It reached a point where it wanted to call attention to itself and give itself some momentum, with a focus on legislation, on the president and the courts.” 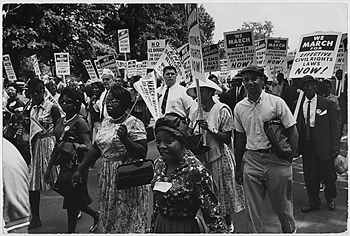 Tussing, who had been given a department faculty position as he finished his studies, and a friend who was a professor in the political science department had talked about how they’d like to get involved in the movement. But even though there were activity and demonstrations in Syracuse at the time, they were not publicized.

“Then we learned CORE, the Congress of Racial Equality, was having a bus to go to the March on Washington and we could go for about 10 or 15 dollars. And we decided to do that and we showed up in our suits and ties,” Tussing says. “We wanted to show that there’s dignity in this.”

Once on the National Mall, Tussing settled in with his friend and the others to listen to the several speakers (since they were too far away to see the speakers), including the leaders with the NAACP and CORE, interspersed with prayer and singers, including Joan Baez and Bob Dylan. “I wrote his name down; I had never heard of him,” Tussing says.

I have a dream

Martin Luther King, Jr., was the last to speak. “The King speech was certainly a wonderful way to end it. He was such a charismatic figure and brilliant orator and he could send us home with our hearts beating,” Tussing says. “I was interested in all the speeches and it was later that his speech began to be the symbol of the march.”

King became “the personal embodiment of the Civil Rights Movement,” Tussing says. “People understand it better if you can present it with one leader. But I became a member of CORE and our leader was Jim Farmer, and so we looked at Rev. King as a leader of another organization.”

Once back in Syracuse, Tussing and his friend became CORE activists. In one act, Tussing was asked to participate in a sit-in at a site in the 15th ward in Syracuse where the government was tearing down homes and public housing for urban renewal and to erect Route 81. Through their efforts, the activists halted the bulldozers for a time.

“When you’re actually meeting people and marching and singing songs—and some of us went to jail, it changes your perspective and it’s much more immediate. It’s not intellectual; it’s a very personal thing,” he says. Acts of civil disobedience and the March on Washington electrified the city and the media could no longer ignore these events, he adds.

The progress of a nation 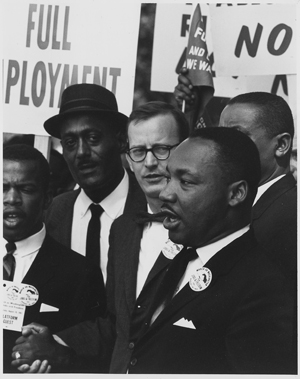 In the past 50 years, Tussing has seen progress. “The government is not the main contributor to official discrimination any longer, like in the school systems. That seems to be a thing of the past and civil rights legislation made sure we don’t have discrimination coming from the state,” he says.

However, the big exception is that of an equally resourced educational system. “In school districts where the tax base is low income, less is spent per pupil than in higher-income areas. The civil rights frontier right now is to find some way to get more equality and distribution of educational resources in the country, but it doesn’t have widespread support,” Tussing says.

As he watches the speakers at the 50th anniversary of the March on Washington, which includes President Barack Obama and former presidents Bill Clinton and Jimmy Carter, Tussing will also look for a mention of concerns about efforts that affect underrepresented groups in voting. This includes areas that are requiring government-issued picture I.D.s and reducing early voting. “There seems to be a general attack on voting in a completely different way than in the prior days of racial discrimination,” Tussing says. “So we’ll see if there’s any talk about that and what may change.”

Tussing is also featured in a recent PBS video among others who recall the march. “Dale Tussing Remembers the March” can be found at video.pbs.org/video/2365063313.