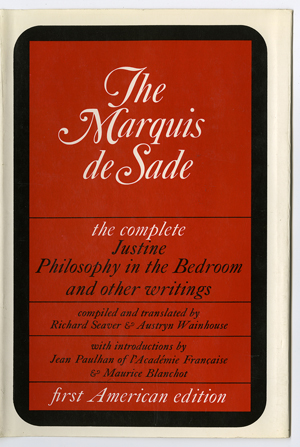 “The Complete Justine, Philosophy in the Bedroom and other Writings,” translated by Austryn Wainhouse, is one of the items in the SU Libraries’ newly acquired Wainhouse archive.

Syracuse University Libraries’ Special Collections Research Center has acquired the archive of American translator and National Book Award winner Austryn Wainhouse. Wainhouse is best known for his complete and uncensored English translations of the Marquis de Sade’s 1791 novel “Justine” (1953), which tells of a well-intentioned young woman who finds herself subjected to all manner of sexual depravity at the hands of the clergy and civil authorities.

“The Austryn Wainhouse archive will be an invaluable resource for scholars at Syracuse University and around the world,” says Amy S. Wyngaard, SU professor of French and editor of Symposium:  A Quarterly Journal in Modern Literatures. “Mr. Wainhouse’s work in fiction and translation was at the cutting edge at a pivotal moment in American literary history.  The archive is of particular importance in illuminating the processes behind Mr. Wainhouse’s translations of de Sade’s works, which transformed the face of publishing and literary studies in the 1960s.”

“It is with great pleasure and confidence that I chose to place the Austryn Wainhouse archive in the hands of Syracuse University and Sean Quimby [senior director of special collections, Syracuse University Libraries],” says Deborah Clayton Wainhouse, Wainhouse’s wife, of her decision to place the archive with Syracuse. “We are pleased to join such a distinguished group of collections.”

Wainhouse was born in Cambridge, Mass., and educated at Harvard University and the University of Iowa. He worked as an editor for Olympia Press, the Paris house that would become known for publishing Vladimir Nabokov, William Burroughs, Henry Miller and Samuel Beckett. Wainhouse won a National Book Award in 1971 for translating the Nobel Prize-winning scientist Jacques Monod’s book “Chance and Necessity.”

The Wainhouse archive complements the libraries’ recently cataloged records of New York publisher Grove Press, and will interest scholars researching the 20th-century literary avant-garde, the history and theory of translation and changing notions of obscenity. The archive will be available to the public in late 2014.