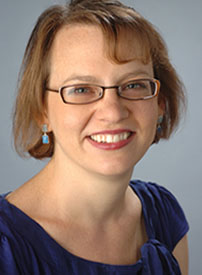 The American Association of University Women (AAUW) awarded a 2013–14 American Fellowship to Sydney Hutchinson, an assistant professor of ethnomusicology in The College of Arts and Sciences’ Department of Art and Music Histories.

Hutchinson is excited to have this award, which will support her research into how gender is performed through music in the Dominican Republic. Specifically, she looks at musicians in the genre of merengue típico, an accordion-based traditional music with many female bandleaders, as well as recent Dominican artists who break the molds of both musical genre and traditional gender roles.

Hutchinson received a Ph.D. from New York University in 2008, was a Humboldt Research Fellow at the Ethnological Museum of Berlin and joined the faculty at SU in 2010. Her book on Mexican American dance and youth culture was awarded a special citation of the De La Torre Bueno Award for books on dance in 2008, and her edited volume on salsa dancing around the world will be published by Temple University Press in December. She has also written about competitive air guitar and organized the Syracuse Annual Air Guitar Competition in 2011 and 2012.

“The American Fellowship program affords scholars the ability to become leading thinkers in their fields and have an impact across multiple disciplines. It’s also a recognition of their great potential because they are receiving support from one of the nation’s most respected women’s organizations,” says Gloria Blackwell, AAUW vice president of fellowships, grants and international programs.

For the 2013–14 academic year, AAUW awarded a total of $3.7 million to 245 scholars, research projects and programs promoting education and equity for women and girls through six fellowships and grants.