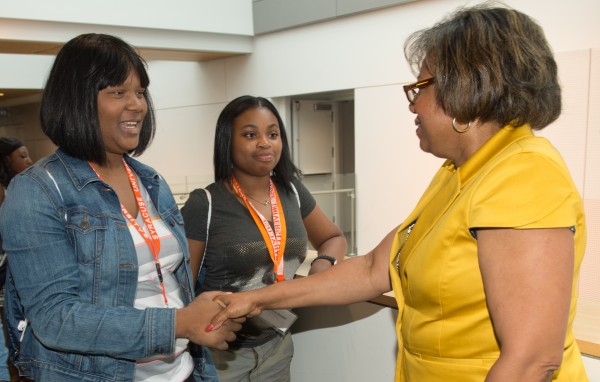 The S.I. Newhouse School of Public Communications recently hosted 10 high school students from the Harlem section of New York City who were on campus to learn about the field of advertising and associated careers.

The students, all part of the 360i/Harlem Children’s Zone/Newhouse School Summer Immersion Pilot Program, spent July 29 and 30 at SU, where they attended workshops, sat in on classes, met with Newhouse faculty members and spent the night in a dorm. They also visited the Carrier Dome and met former SU football defensive back Jason Poles, now assistant athletic director of major gifts with SU Athletics. The program was funded by digital marketing agency 360i and its CEO, alumnus Bryan Wiener ’92.

The students were sophomores and juniors involved with the Harlem Children’s Zone (HCZ), a nonprofit organization serving disadvantaged children and families living in Harlem. They were chosen from among 32 students in media arts at Promise Academy and Employment and Technology Center (ETC), programs associated with HCZ.

Students gave the experience rave reviews. “No college trip I have been on was ever as good as this one,” said one student. “We did a lot in a little bit of time, but it was really good. They showed me more in two days than any college experience I have had—and some of them were a week long!”

Says Nia Dawson, director of ETC: “The 360i-sponsored trip to Syracuse University did more than give our students a ‘real’ college experience; it reinforced the idea that they matter … and that is priceless.”

“The developing partnership between HCZ, Newhouse and 360i is providing young students with access to the education, training and networking necessary to succeed in today’s rapidly changing communications marketplace,” says Wiener. “This is part of a series of pilot programs we have rolled out over the last three years with HCZ and we’re continually developing new programs to provide these students with hands-on learning and experiences.”

Wiener also established the 360i and Newhouse Digital Advertising Alliance at the Newhouse School in 2012.