Robert Doyle will experiment with ‘gut hormone’ and vitamin B12 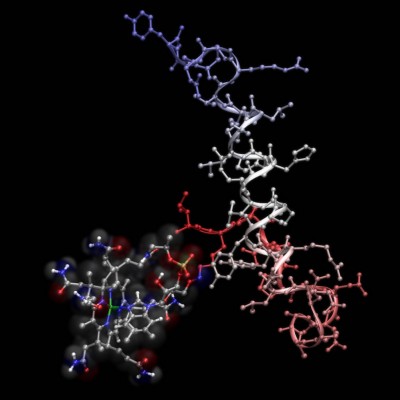 A chemist in The College of Arts and Sciences has received a federal grant to study the oral administration of PYY3-36, a peptide that inhibits food intake by naturally switching off one’s appetite. The project is said to have major implications for people struggling with obesity and associated diseases, such as cardiovascular disease and diabetes.

Robert Doyle, associate professor of chemistry, has been awarded $221,000 by the National Institute of Diabetes and Digestive and Kidney Diseases at the National Institutes of Health. His project will last for two years, with the option of a third, and will involve Christian L. Roth, a pediatric endocrinologist at Seattle Children’s Hospital.

The award comes on the heels of a landmark decision by the American Medical Association to categorize obesity as a disease requiring a “range of interventions,” including weight-loss counseling, medication and surgery.

“Obesity is one of today’s leading health challenges—not only in North America and Europe, but also in Asia and Australia,” says Doyle, whose expertise spans chemistry and biology. “The prevalence of obesity among children and adolescents is of particular concern, despite public health education and initiatives.”

At the heart of Doyle’s project is PYY3-36, a gut hormone that presumably supports the long-term benefits of bariatric surgery—currently, the only effective long-term exogenous treatment for obesity.

Doyle plans to utilize vitamin B12, which supports functioning of the brain and nervous system, to help protect and carry PYY3-36 through the gastrointestinal tract.

“We will trick the digestive system into carrying our peptide [PYY3-36], along with the B12,” says Doyle, who also holds faculty appointments in biology and biochemistry. “PYY3-36 will then send messages between the intestine and the brain, as well as in the brain, itself, telling you when you’re full. That’s why it’s called the ‘satiety peptide.’”

Since pharmacotherapy is merely an adjunct treatment for obesity management, the race is on to develop novel anti-obesity drugs that are safe and effective.

“Ultimately, we want to develop an oral formulation that takes advantage of our bodies’ own appetite-control elements,” he says. “But first, we need to study its effects.”

Doyle, who earned a Ph.D. from Trinity College in Dublin, joined SU’s faculty in 2005. Since then, he has produced award-winning research that may lead to new treatments and diagnostic tools for diabetes and cancer. Much of his work, such as the utilization of B12 to orally deliver proteins, draws on chemical or systems biology research.