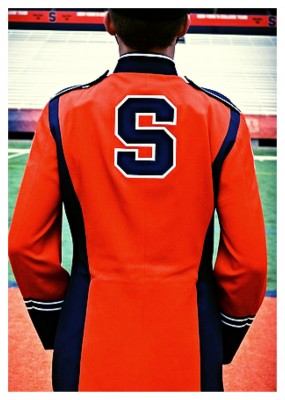 The back of the new band uniform

“A New Look for a New Era,” the campaign to outfit the Syracuse University Marching Band (SUMB) in new uniforms for its Atlantic Coast Conference (ACC) debut this fall, has achieved its $150,000 goal.

The band, housed in the College of Visual and Performing Arts’ (VPA) Rose, Jules R. and Stanford S. Setnor School of Music, wanted to replace its tired and worn 15-year-old uniforms with new ones that captured the “Pride of the Orange” in time for SU’s inaugural ACC football season and the first ACC home game versus Clemson on Oct. 5 at the Carrier Dome.

“We are thrilled and humbled at the overwhelming response from friends, fans and alumni that made this a reality,” says Justin Mertz, director of the band. “SU’s athletic bands are the authentic sound of college sports, and now we’ll really look the part. On behalf of all of the students, faculty and staff of the SUMB, I offer my sincerest and heartfelt thanks. We will be ready for our ACC debut and can’t wait to show off our new look. Go Orange!”

The campaign goal was achieved thanks to generous donors and the efforts of Jean ’66 and Richard L. Thompson G’67, chairman of the SU Board of Trustees, who highlighted the campaign during SU’s Spring Trustee Weekend. In December 2012, the Harry T. Mangurian Jr. Foundation Inc. kicked off the campaign by committing a $75,000 challenge gift facilitated by Terry M. Skuse G’75. The campaign was also bolstered by generous donations from Louise and Howard (Howie) G. Phanstiel ’70, G’71, an SU Trustee; Vivian and John H. Chapple ’75, an SU Trustee; Mary Cotter ’69; Diane and Peter Lynch ’74; Carol and Peter Maciulewicz; and Lauren B. Cramer G’94, an SU Trustee. Thirty-six donors contributed $500 or more to the campaign; each will have a patch with his or her designated name sewn into a uniform in acknowledgement.

The new uniforms feature the University’s block “S” and offer an updated version of a timeless, classic design to honor SU’s history and tradition while also looking to the future. Each uniform was manufactured in the United States by DeMoulin Bros. and Co. with fabric made from 100 percent recycled material. To account for fluctuations in band membership and size requirements for seasons to come, SUMB needed to purchase 300 full uniforms.

Founded in 1901, the SUMB performs for all home football games in the Dome and is the flagship college band in the state of New York. It also serves as an SU ambassador, representing the University at major events both on and off campus. Current membership is approximately 200 students from across the University’s schools and colleges.