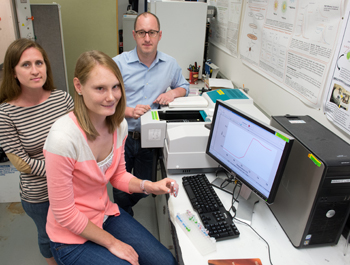 A team of chemists in SU’s College of Arts and Scientists has used a temperature-sensitive polymer to regulate DNA interactions in both a DNA-mediated assembly system and a DNA-encoded drug-delivery system.

Their findings, led by Associate Professor Mathew M. Maye and graduate students Kristen Hamner and Colleen Alexander, may improve how nanomaterials self-assemble into functional devices and how anticancer drugs, including doxorubicin, are delivered into the body. More information is available in a July 30 article in ACS Nano, published by the American Chemical Society.

One area of nanoscience that connects a range of fields—including optics, chemical sensing and drug delivery and treatment—is the self-assembly of nanoparticles. During self-assembly, the chemistry attached to the nanoparticle interface drives a reaction. As a result, particles come together to form a solid, a chai or a small molecule-like cluster.

Maye and others have recently figured out how to use DNA linkages to create an array of structures. The reactions are fast and stable, he says, but can also be problematic.

“For example, we want to know how to turn a reaction on and off, without tedious changes to the procedure,” says Maye. “We’ve been addressing this problem by providing a thermal trigger in the form of a smart polymer, which changes its structure at the nano level.”

A smart polymer is a large molecule, made up of many atomic units, that changes structure when exposed to external stimuli, such as light, acidity or temperature.

Maye and his colleagues have synthesized a designer polymer that not only reacts to temperature, but also may be assembled to a gold nanoparticle. The novelty of this approach, he says, is that the nanoparticle possesses short segments of single-stranded DNA.

“This multipurpose functionality and added ‘smart’ component are indicative of where nanoscience is going,” says Maye. “We want nanomaterials to perform many tasks at once, and we want to be able to turn their interactions on and off remotely.”

Maye’s team, therefore, has designed a system in which a high temperature (e.g., 50 degrees Celsius) causes polymer strands to shrink, thereby exposing and making them operational, and a low temperature causes them to extend, blocking their DNA recognition properties.

Maye says that, in one test, self-assembly between complementary DNA nanoparticles occurred at only a high temperature. In a second study, his team found that heat triggered the release of doxorubicin at the DNA shell of the encoded nanocarrier.

Recently invented by Maye and his SU colleagues, the nanocarrier boasts a six-fold increase in toxicity, compared to ones used in previous studies.

“What’s novel about this approach is that interparticle linkages are dynamic and reconfigurable,” Maye says. “Such reconfiguration may lead to smart solids and metamaterials that react to environmental stimuli, much the same way smart polymers react in bulk.”

Maye and his team have also employed a number of advanced techniques to better understand the mechanisms of their system, including dynamic light scattering and small-angle X-ray scattering.

“Being able to control nanoparticle assembly with temperature allows us to fine-tune their reactions and form more predictable structures. It also gives us a more improved system in which to scale assembly,” he says.

Maye goes on to explain that for DNA-encoded nanoparticles, such classes of particles are an excellent platform for drug delivery: “When combined with thermosensitive polymers such as the ones in our system, they could become very lucrative.”

In addition to Maye, Hamner and Alexander, the article was co-authored by students from two National Science Foundation (NSF) Research Experiences for Undergraduates programs—one in SU’s chemistry department and the other in the Syracuse Biomaterials Institute—both of which are sponsored by the NSF.

Maye’s work is supported by the Air Force Office of Scientific Research, as part of his Presidential Early Career Award for Scientists and Engineers. Additional support is provided by SBI and by SU’s Forensic and National Security Sciences Institute. Maye’s work has also made use of X-ray scattering equipment in the Cornell High Energy Synchrotron Source lab at Cornell University.