The Limits of War 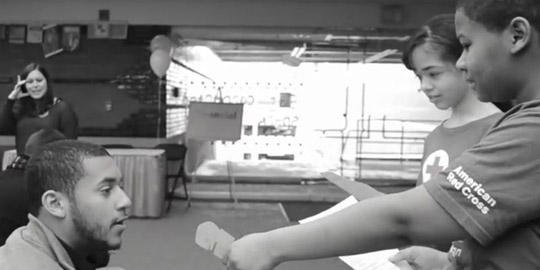 Students from the Southside Academy Charter School in Syracuse interview SU students in a video the youngsters made for their American Red Cross International Humanitarian Law (IHL) Action Campaign. The students were mentored by SU students Meagan Bridges ’13 and Shweta Shreyarthi ’13, working through a new Red Cross pilot program.

Is torture legal? Is one death justified to save thousands of lives? Are soldiers responsible for obeying an officer’s command to kill civilians?

Questions on the limits of war are hard for many adults to answer. For young people, the concepts might be even more difficult to grasp.

In partnership with the American Red Cross of the Central New York Region, four Syracuse University students challenged a group of young people at the Southside Academy Charter School to think about these questions. Through a series of interactive simulations, role playing and discussions, they discovered the younger students had much to share about the moral complexities of war.

Meagan Bridges ’13, Mallory Lang ’13, Adyna Lungu ’13 and Shweta Shreyarthi ’13 were team mentors to two groups of students last spring as part of the American Red Cross International Humanitarian Law (IHL) Action Campaign. The SU students took part in the pilot program, which is a youth-led program to teach young people about laws developed through the Geneva Conventions that aim to protect human dignity and reduce civilian suffering during war.

Lungu worked with Lang mentoring one group of seventh- and eighth-graders, leading them through activities to reflect on such concepts as torture—which according to international law is always illegal—and whether or not a soldier is responsible, along with the commander, in obeying an immoral or illegal order.

“The kids’ response to the question was parallel to what we said in our training: they are all responsible; it becomes a moral issue,” says Lungu, who graduated with a psychology degree. “It was great to know these are the kids of the future, and look how easy it was for them to grasp this. They understood certain things that you may not think they understand.”

The SU students, who became involved through their work with the American Red Cross Club at SU, received specialized training from the Red Cross to implement the program with the middle school students. As mandated by the Geneva Conventions and its Congressional Charter, one of the key roles of the American Red Cross is to educate the public about International Humanitarian Law or the Rules of War.

“We gave the students lessons on the content of International Humanitarian Law, but we also implemented activities for them to complete, which had a significant impact on their retention of the information,” says Bridges, who earned degrees in political science and Spanish language, literature and culture. “We taught them about the rules of war, child soldiers, distinction of targets and proportionality, among other things.”

Along with teaching students the concept that even wars have limits, the IHL Action Campaign program seeks to help students develop as critical thinkers and compassionate global citizens—and act on their understanding of IHL in their communities through an awareness project. 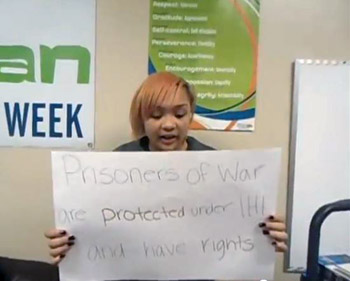 A Southside Academy Charter School student discusses laws involving prisoners of war for a video as part of the American Red Cross IHL Action Campaign. SU students Mallory Lang ’13 and Adyna Lungu ’13 worked with the group of students to create the video.

“The SU students had very strong convictions about teaching youth about protecting life and human dignity—and also about youth empowerment, giving them an outlet for the youth to express what they had learned,” says Jessica Lane, American Red Cross regional youth and young adult coordinator and IHL Action Campaign program manager in Central New York.

Both groups created videos about the illegality of torture. “Experiential learning was the main methodology used to expose youth to IHL principles and rules. Instead of focusing on lectures, the students learned these concepts by acting them out, reflecting on them and applying their newfound knowledge of IHL in the form of an action campaign,” Lane says.

Bridges’ and Shreyarthi’s team produced a YouTube video that showed the middle school students interviewing SU students and people in downtown Syracuse to test their knowledge about torture.

“When we created our campaign, we wanted to get the idea out that torture is not legal, while showing how many people are unaware of that,” says Shreyarthi, who graduated with a public health degree.

Bridges’ and Shreyarthi’s team was one of six nationally to be selected to present their video at the first National IHL Youth Symposium in Washington, D.C., in June.

“When we were chosen, we as interns were so excited,” Bridges says. “Not only did it prove that we had a positive influence on our students, but it showed our students that what they did had an impact on their community, as well as on our directors and supervisors at the American Red Cross.”

The opportunity meant a lot to their team members. “They were excited to be recognized by their school and the Syracuse community and to travel outside of New York State,” Shreyarthi says.

Lang, who earned a political science degree, and Lungu and their team produced a YouTube video that included dramatizations of the victims of war and the facts behind the rules of war.

“It’s a way to get the community involved in IHL and let them know this is what happens,” says Lungu, who, along with Lang, was selected as Volunteers of the Month by the Red Cross chapter in May. “We may all be watching the news about war but we may not understand exactly what’s going on.