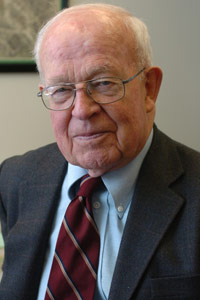 Guthrie S. Birkhead Jr., dean emeritus of the Maxwell School and a professor of public administration and political science for 50 years, died on July 22 in Syracuse.

Birkhead served as Maxwell’s dean from 1977-88, after having taught at Maxwell for nearly 30 years. When he stepped down as dean, he remained on the faculty to, in his words, “stay connected with the students.” He continued to teach, served on dissertation committees and was faculty advisor to thousands of undergraduate and graduate students during his career.

Birkhead joined the Maxwell faculty in 1950. The youngest member of the Maxwell faculty for years, he helped lead the school’s growing involvement in government projects overseas. He traveled abroad intermittently, serving as research director for the United Nations’ Public Administration Institute for Turkey and the Middle East in Ankara in 1955-56 and as advisor to the Pakistan Administrative Staff College in Lahore from 1962-64, and returned as the Ford Foundation’s public advisor in Pakistan in 1967. Birkhead’s role in these projects was to provide public administration training and resources to civil servants.

He was director of Maxwell’s public administration program and served two terms as chair of the political science department. He was also director of the school’s Metropolitan Studies Program. During his career, he wrote and edited countless scholarly books, book reviews and research studies on government and policy making.

In addition to his academic achievements, Birkhead was an active participant in New York State public policy. He served as executive director of the committee of local government and home rule at the New York State constitutional convention in 1967 and as chairman of the New York State Democratic Party platform committee under Governor Mario Cuomo in 1983-84. His interest in natural resources, dating back to his Princeton dissertation, led him to the forefront of numerous initiatives regarding conservation and water administration in New York State, including serving as associate director of the Delaware Valley Project of the Delaware River Basin Commission.

Birkhead earned an associate’s degree at Jefferson City Junior College in Missouri; bachelor’s and master’s degrees at the University of Missouri; and a master’s and Ph.D. from Princeton University. He was a member of Phi Beta Kappa, Sigma Xi and the National Academy of Public Administration, among other affiliations. During World War II, he was a first lieutenant in the 89th Infantry Division, known in Patton’s Army as the “Rolling W.”

He is survived by Louise Gartner Birkhead, his wife of 60 years, a former Syracuse city administrator and an alumna of the Maxwell M.P.A. program; three sons: Guthrie S. Birkhead III of Delmar, N.Y., Richard G. Birkhead of Amesbury, Mass., and Evan C. Birkhead of Jackson, N.J.; their wives; and five grandchildren.

Birkhead’s family welcomes gifts in his name to the following organizations: