Girls Leadership Academy for Music at Setnor School of Music helps young women develop their abilities to take charge and discover their potential. 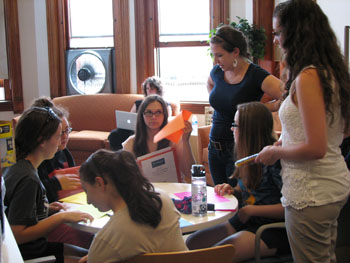 During the Girls Leadership Academy for Music, young women from 14-17 from area middle and high schools develop leadership skills through workshops, listening to guest speakers, interacting with mentors and other activities.

On a recent weekday in a Crouse College lounge, Samantha Baldwin ’12, G’14, and Rachel Dentinger ’13, G’15, gathered around their small group of mentees to pass out colored paper and their next creative assignment.

Their task: compose a poem about leadership and responsibility—what that means to them and what they’ve learned about it during their week at the Girls Leadership Academy for Music (GLAM).

The girls, ages 14-17, set to work on their verses, which would eventually end up on a presentation board of words and images. The purpose was to get them to address their own beliefs about leadership and help them see the potential in themselves.

“Daring, Fair, Hopeful, Kind …,” one girl wrote. “And most important of all a leader will guide their group to be the best they can be to be truly strong.”

Through this and other activities during the week, Baldwin and Dentinger, who both studied music education as undergraduates, wanted to give the girls a sense of themselves.

“One great thing that we talked about throughout the week was developing a value system and knowing what and who is important in their lives—and that will shape their priorities, which in turn will shape what goals they have,” Baldwin says.

They also need to take advantage of opportunities, such as music leadership or honor society, which will help them learn and grow. “I want them to gain confidence in their abilities and experiences, and develop into the sort of person that I think I was shaped into by all the people and experiences that impacted me,” says Dentinger, who was involved in Girl Scouts and other activities.

In its inaugural year, GLAM was created through the Setnor School of Music in the College of Visual and Performing Arts and its Community Music Division to help girls in music develop their leadership skills through workshops, mentors, activities and guest speakers. The girls are from area middle and high schools.

The idea initially came from Setnor School of Music Director Patrick Jones, who proposed a leadership academy for girls to Amy Mertz, assistant director of admissions and community programs. The concept struck a chord with Mertz, who looked at the statistics of the number of women in music leadership roles.

“There are only two full-time conductors of major American orchestras who are female,” Mertz says. At the university level, women represent about 5 percent of band directors, 8 percent of choir directors and less than 2 percent of orchestra directors. The statistics also play out across all employment sectors, with only about 17 percent of top-tier positions being held by women.

“Many of the girls have female band or choir directors at the high school and middle school level,” Mertz says. “But when you make that jump to the college-level, those numbers start to drop away, so we want to encourage them to keep on going.”

First of its kind

Mertz also found they were developing something unique. “I did my research and there is nothing like this music leadership academy in the country,” she says. “It’s using music as a lens to teach girls leadership skills, so it evolved from there.” 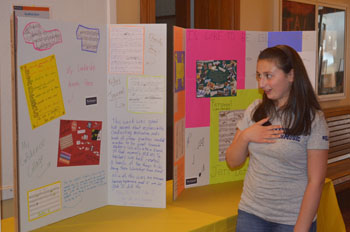 Liverpool High School student Julie Coggiola shares her projects and assignments on her presentation board during the last day of the Girls Leadership Academy for Music.

Each day of the program, which ran from July 8-12, started with movement—such as yoga or a walk—and then on to the development of general leadership skills, such as conflict management, motivation and time management.

The afternoons were spent on music leadership on such topics as conducting and rehearsal techniques. Guest speakers from the world of music also shared insights with the girls to show how they evolved into their current leadership positions.

Another crucial piece was the mentors and representing to the girls what is possible while they are in college.

“I have always been a shy person, but I’ve had leadership opportunities with the SU Marching Band and was the drum major my senior year, which helped me come out of my shell,” says Baldwin, who is working on master’s degrees in music education and instrumental conducting. “That definitely helped my teaching and it’s something that I wanted to help these girls develop to become better leaders.”

Dentinger, who is pursuing a master’s in music education and reading and literacy, says the week has also taught her lessons, and she enjoyed the discussions and insightful comments from the girls on current topics. “We talked about female performers in orchestras, which are traditionally more male, and how blind auditions have helped to change that,” she says. “We talked about how people are affected by stereotypes and prejudices and how to deal with that.”

Mertz, who expects to expand the academy next year, saw how the girls responded to the positive role models and built their confidence throughout the week. “I would like them to take opportunities presented to them, but also know they don’t necessarily have to wait for them,” she says. “They are confident, skilled leaders and they can make their own opportunities.”