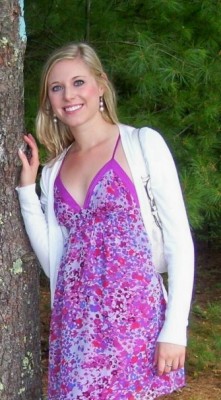 The Undergraduate Leadership Award, presented yearly at the School of Information Studies (iSchool) Convocation, has been named in honor of iSchool alumna Katie Bennett ’10, G’12, who passed away in late June.

SIDEARM Sports, a company founded and led by Associate Professor of Practice Jeffrey Rubin ’95, G’98, made a memorial gift to the iSchool that permanently names the honor as the Katie Bennett Undergraduate Leadership Award. Bennett won the award at her 2010 graduation, and had worked for Rubin at SIDEARM for a number of years during her Syracuse career.

“Katie touched so many lives in such a positive way here at Syracuse during her time as an undergraduate and graduate student, and was a leader within our school and across the campus,” recalls iSchool Dean Liz Liddy. “We deeply appreciate that Jeff Rubin and his team at SIDEARM, whom Katie worked with, were moved to establish this wonderful award.”

At the time of her death, Bennett worked as a technology analyst and project manager for JPMorgan Chase & Co. in Philadelphia.

Bennett was one of the original JPMorgan Chase interns in the company’s collaboration with the iSchool’s Global Enterprise Technology program from 2009 to 2011.

“Katie embodied leadership,” recalls Rubin. “Leadership is about having charisma, intelligence, vision and values, and if anyone ever worked with Katie on a group project, or was fortunate to be on her team at JPMC, they know she was the definition of a leader.”

At Bennett’s memorial service, Rubin told attendees, “I will always remember Katie Bennett who came to Syracuse University in 2006, started off as my student, worked as an employee, earned the right to be my graduate assistant and most importantly became my friend.”

While at Syracuse, Bennett served as an iSchool Peer Advisor, worked with the Panhellenic Executive Board and was a member of Alpha Chi Omega and the Orange Pulse Dance Troupe.

The iSchool has created a remembrance page for friends to share their stories and honor Bennett.

Bennett’s family has established the Katlyn Mary Bennett For Answers foundation, to expand awareness and options for women who struggle with anorexia. More information about the foundation is available at the website: http://www.kmbforanswers.org.