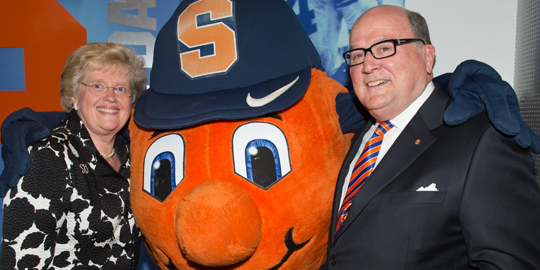 Jean and Dick Thompson with Otto the Orange

Syracuse University has announced a transformational gift of $1 million from Syracuse Board of Trustees Chairman Dick Thompson and his wife, Jean, to advance SU athletics and celebrate the historic move to the Atlantic Coast Conference. The gift will be used to enhance the overall student-athlete experience and to continue to help build the competitive excellence of Orange athletic teams.

“We are overwhelmed with unbelievable gratitude and joy for the very thoughtful gift from Dick and Jean Thompson. They have been extremely supportive of Syracuse athletics for many years and have given us the confidence to truly believe we can succeed in the future, especially as we enter the ACC. It’s this kind of commitment which makes Syracuse university so great and intimate. Today we toast the Thompson family as they have helped ensure the continued success of our athletic program,” says Syracuse Athletics Director Daryl Gross.

The gift is the largest of the ‘I’m In’ campaign for athletics to date, which encompasses a new push for involvement from all of Orange Nation to help provide the resources necessary to be competitive at the highest levels of the ACC.

“Athletics has been an integral part of the Syracuse University identity since its founding in 1870. We are pleased to announce the dedication of a $1 million pledge to these programs to launch ‘Cuse’s membership in the Atlantic Coast Conference. It is a great day for our University, the Syracuse community, and intercollegiate sports,” says Board of Trustees Chairman Dick Thompson.

“We are very grateful to the University and especially the Athletic Department for their support of a variety of outstanding college teams for women and men,” says Jean Thompson. “My father, John F. Phelan, was a student-athlete and a proud member of the SU football team in 1940. We hope this gift will help sustain the University’s commitment to future generations of student athletes as it launches its membership in the Atlantic Coast Conference.”

“We are so thankful to Dick and Jean for this incredible, transformational gift to Athletics,” says SU Chancellor Nancy Cantor. “Their remarkable generosity will enable our student-athletes to continue to excel as we enter the ACC.”

The gift, which the Thompsons pledged as part of the Campaign for Syracuse, came just hours after the formal announcement of SU’s inclusion into the ACC at a press conference in New York City attended by Gross and head basketball coach Jim Boeheim. Specific provisions of the gift will be announced in the coming months.