Movies on the Quad Planned: ‘Skyfall’ This Friday 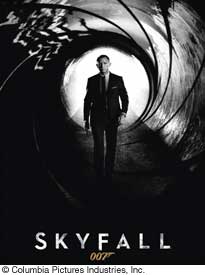 Summer at Syracuse is again sponsoring movies on the Quad. Arrive at 8 p.m. for a good seat. Movie begins at 9.

In “Skyfall,” James Bond’s loyalty to M is tested as her past comse back to haunt her. As MI6 comes under attack, 007 must track down and destroy the threat, no matter how personal the cost.

Wreck-It Ralph longs to be as beloved as his game’s perfect Good Guy, Fix-It Felix. Problem is, nobody loves a Bad Guy. But they do love heroes… so when a modern, first-person shooter game arrives featuring tough-as-nails Sergeant Calhoun, Ralph sees it as his ticket to heroism and happiness. He sneaks into the game with a simple plan — win a medal — but soon wrecks everything, and accidentally unleashes a deadly enemy that threatens every game in the arcade. Ralph’s only hope? Vanellope von Schweetz, a young troublemaking “glitch” from a candy-coated cart racing game who might just be the one to teach Ralph what it means to be a Good Guy.