The Newhouse School today revealed plans to name its renovated studio facilities Dick Clark Studios in honor of legendary entertainer and alumnus Dick Clark ’51. The announcement was made by Clark’s widow, Kari Clark, at the school’s annual Mirror Awards ceremony honoring excellence in media industry reporting. The event was held at Cipriani in New York City, where special honors also went to Anne Sweeney, co-chair of Disney Media Networks and president of Disney-ABC Television Group, and Nate Silver, statistician, writer and founder of fivethirtyeight.com. Clark was honored with the Lifetime Achievement Award. 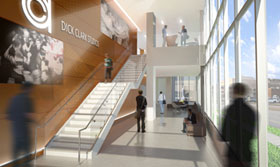 Clark was a 1951 alumnus of what is now the Whitman School of Management at Syracuse University, which played an important role in shaping his life in radio and TV. He began his broadcasting career with radio station gigs in Central New York, working at WAER-FM as an SU student and at Utica’s WRUN radio, where his father, SU alumnus Richard A. Clark ’18, was the station manager. During his senior year at SU, he joined WOLF-AM in Syracuse. After returning to WRUN and then moving to a Utica television station, Clark’s star took off when he headed to Philadelphia to join WFIL-AM. The young DJ soon became host of “American Bandstand,” a WFIL-TV program that was eventually broadcast nationwide on ABC. Through the show, Clark helped introduce rock ’n’ roll to mainstream America.

“Syracuse was always important to Dick and very close to his heart throughout his life,” says Kari Clark. “It will mean so much to see his name attached to a school and a studio facility that will literally launch a thousand careers in this business. This is just a continuation of what he did with ‘Bandstand’—gave youth a stage, then got out of the way.”

“My dad was part of a long line of family members who got their start at Syracuse University,” says Clark’s daughter, Cindy Clark ’86, noting that 18 members of the Clark family, herself included, have attended SU. “It’s only fitting that part of his legacy includes helping further generations of Syracuse students get their start, too.”

For Clark, supporting SU was all about the students. For nearly 20 years, beginning in the late 1980s, he hosted Newhouse students on the school’s annual trip to Los Angeles, helping many of them secure their first jobs in the entertainment industry. “His door was always open to us,” says Larry Martin, SU’s vice president of program development, who organized the trip. “I first contacted him in the 1980s—he was a giant in the entertainment industry—and he responded right away, very enthusiastic about meeting the students.” Martin also remembers Kari Clark’s enthusiasm. “She went out of her way to accommodate us,” he says. “She was very important in arranging our meetings with him.”

Clark also made a $1 million gift to his fraternity at SU, Delta Kappa Epsilon, to provide need-based academic scholarships to leaders within the organization.

The Newhouse School is currently engaged in an $18 million renovation of Newhouse 2, one of the school’s three buildings, which was dedicated in 1974 by then CBS Chairman of the Board William S. Paley. The renovation will update the school’s studio facilities, bringing them fully into the digital age and providing students with cutting-edge equipment and work spaces that more accurately reflect professional settings in broadcast, television and film production.

In addition to the lead gift from the Kari and Dick Clark Foundation, additional funding will come from several sources, including a major gift from media entrepreneur Alan Gerry for the Center for Media Innovation; the S.I. Newhouse Foundation; Syracuse University; and other alumni and friends of the Newhouse School. Gensler, the award-winning San Francisco-based architectural firm that worked on the feasibility study, will handle the design. Completion is slated for Fall 2014.

“This gift is a ‘perfect fit’ not only because it ensures that our students will be trained in state-of-the-art studios, but also because Clark embodied all the qualities we seek to instill through a Newhouse education,” says Newhouse Dean Lorraine Branham. “As a storyteller, an innovator, a cultural pundit and an entrepreneur, Dick Clark is not only a legendary figure from the past but also a role model for future generations of entertainment entrepreneurs.”