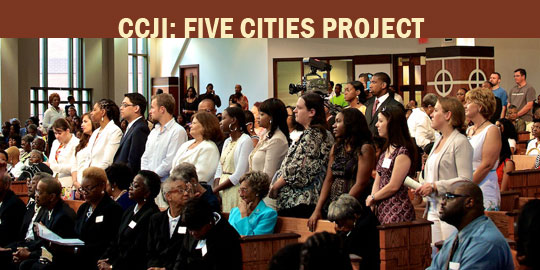 The Cold Case Justice Initiative (CCJI) at Syracuse University has announced in Atlanta that it is launching its Five Cities Project this summer. Its student workers will be sent into five southern cities to begin to take a full accounting of racially motivated killings that may have occurred during the period between 1955 and 1980. The cities are Atlanta; Nashville; Baton Rouge; Jackson, Miss.; and Jacksonville, Fla. Thirteen students will conduct document research and participate in dialogues in these communities to identify and find residents who believe they lost loved ones in racially motivated crimes during the civil rights era.

These cities represent areas where the CCJI has already worked for the past six years with families who seek justice for their loved ones killed as a result of racial hatred. Important community connections are being formed to further the work of all such families in the particular region. “There is a critical need for this kind of action in more cities,” says CCJI Co-Director Professor Paula Johnson. “If we had more funds, we could add many more cities to the list of those with unfinished criminal justice demands from this era.”

“By their public statements the DOJ has made it clear. They close cases when they find that the main perpetrator is deceased,” Johnson goes on to say. “They do not seem to expand the search for accomplices or go back into these scarred communities to conduct new interviews with people who are willing to talk today. The FBI would rather rely on 40-year-old paperwork and are leaving the difficult part up to non-governmental organizations like ours.”

The growing realization of a critical need for the Five Cities Project came to pass as a result of the six years of intensive research by the CCJI. An effort began in the summer of 2010 to find out just how many victims of racial violence are not included on any list of the FBI, the Justice Department or local law enforcement agencies. Over the course of a year and a half, a canvassing effort revealed figures startling both in scope and size. The CCJI’s preliminary investigation had uncovered 196 suspicious deaths in 10 states and investigators realized there were many similar suspicious killings to investigate. This list of names was turned over to the FBI in the fall of 2012. To date, there has been no response from the Justice Department or the FBI about this list.

“The 2008 Emmett Till Unsolved Civil Rights Crimes Act required the Justice Department and the FBI to ‘expeditiously investigate’ and ‘provide all the resources necessary to ensure timely and thorough investigations’ of unsolved civil rights murders,” states Professor Janis McDonald, co-director of the Initiative. “There is no sense of urgency reflecting the intent of Congress in passing this law, however. There are still perpetrators living in these communities who have escaped the criminal accountability demanded by any fair sense of justice.”

For the co-directors of the CCJI, the Emmett Till Act has been a failed promise to the families and to society. “We feel the government should be deeply embarrassed and determined to act now while there is still time and while the law requires this effort,” explains McDonald. “There has never been a full accounting of all the people who disappeared or were slain due to racial hatred during the civil rights era and it should not be relegated to history. We are left with no moral choice but to help these families continue their struggle for justice. The Five Cities Project is a step in that direction.”

This project is a natural evolution for the CCJI as it maintains its pledge—continued support for family members wanting to know the truth—and its collaborations with investigators and journalists who’ve committed themselves to searching for the same in these senseless murders and cover-ups.

To see more photos of the weekend event, go here.