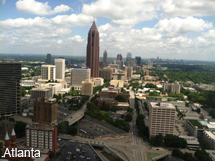 Representatives from The Cold Case Justice Initiative at Syracuse University have traveled to Atlanta to announce the Five Cities Project this summer. CCJI co-directors and law professors Paula Johnson and Janis McDonald and their student workers will fan out to five southern cities to begin to take a full accounting of racially motivated killings that may have occurred. Cities include Atlanta; Nashville; Baton Rouge; Jackson, Miss.; and Jacksonville, Fla.

The weekend will also be marked by visits to historic sites in Atlanta, including the Martin Luther King Junior Center and Ebenezer Baptist Church, where King and his father both served as pastor. But the main motivation is to shed light on racially motivated murders from the civil rights era.

“There are many families out there suffering because justice has never been served,” says McDonald. “There has never been a full accounting of the deaths of these people. We want them to know that families are first. We respect them and want to help in any way we can.”