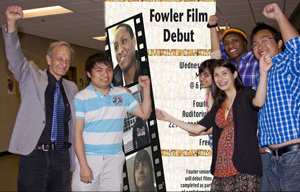 Students from Syracuse’s Fowler High School partnered with undergraduates from the S.I. Newhouse School of Public Communications to produce three films about life in the halls, classrooms and playing fields of Fowler.

The Fowler students, Khang Tran, Phuc Do, Vincent Ndabaruta and Deemah Abdulwahed, participated in a 10-week seminar taught by Newhouse Professor Richard Breyer. On weekends they worked on the films with students from the Newhouse School.

The films were screened to students, faculty, family and community members at the Fowler auditorium on May 1. SCSD superintendent Sharon Contreras attended, and invited the students to show their films at the next school board meeting.

The films were shown at the May 14 meeting to a very appreciative audience.

One of the films, “A Player for Life,” is available on YouTube.