‘An Iliad’: Powerful Adaptation of an Ancient Tale 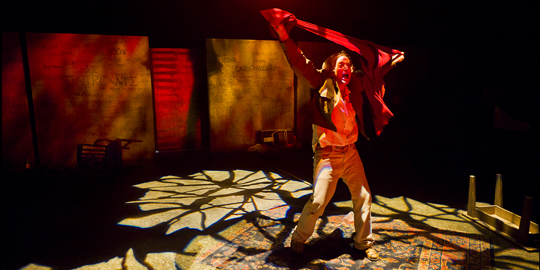 One of the world’s oldest stories comes to life from the point of view of a single poet in “An Iliad,” directed by Penny Metropulos (“Red,” “Picasso at the Lapin Agile,” “Up”) at Syracuse Stage. Lisa Peterson and Denis O’Hare’s adaptation of Homer’s epic poem expresses the suffering and heroism of war, connecting the decade-long battle to the woes of war and conflict that continue today. The emotionally passionate and yet humorous poet, played by Joseph Graves (“Red”), embodies many characters, from the warrior Achilles to the seductive Helen of Troy.

“An Iliad” will be performed in the flexible 200-280 seat Arthur Storch Theatre with an “avenue” seating configuration. Two banks of seating will flank opposite sides of the performance space, creating an up-close experience that will feel like performance in the round. Avenue seating was previously utilized for “Lookingglass Alice” in 2010.

Illuminating the heroism and horrors of war, “An Iliad” is a contemporary adaptation told in today’s vernacular, a 100-minute turbulent adventure asking the question: What has really changed since the Trojan War?

Throughout the show, the poet makes multiple comparisons to contemporary society and invites the audience to imagine just how traumatic this ancient battle was. His interruptions of the story give insight on how massive the war was, the scale of how many people it affected and how violence continues to cause suffering today.

“When we look into the eyes of those living who have known the reality of war, words fail. This is where poetry enters,” says Metropulos. “The poet urges us to see that we can only abate our fear, hate and rage with compassion and love and understanding. This is why Homer sang.”

The poet invites the audience into the story with him, drawing parallels to the way people viewed war and honor, now and then. A passionate man with a disheveled appearance, the poet admits that he has been singing this story for years. His account of the Trojan War starts with the arrival of the hundreds and hundreds of ships into the city of Troy and centers around the great warrior Achilles, his enemy Agamemnon and best friend Patroclus.

The role of the poet will be performed by Joseph Graves, who Syracuse audiences will remember from his performance as abstract expressionist painter Mark Rothko in last season’s production of “Red.” Graves is the artistic director of Peking University’s Institute of World Theatre and Film in Beijing, where he has directed and/or produced 70 plays.

Graves and Metropulos collaborated previously on a critically acclaimed production of “An Iliad” for Portland Center Stage in 2010. “A performance that can honestly be described as spellbinding,” said Willamette Week. “Intimate, unstuffy, timely, accessible,” said the Seattle Times.

Co-Playwright Denis O’Hare won the Tony, Outer Critics Circle and Drama Desk Awards for his performance as Mason Marzac in the hit Broadway play “Take Me Out.” Other Broadway productions include “Assassins” (Tony nomination), “Sweet Charity” and “Inherit the Wind,” among others. “An Iliad” is his first collaboration and his debut as a writer for theater. His television work includes the role of Vampire King Russell Edgington in HBO’s “True Blood.”