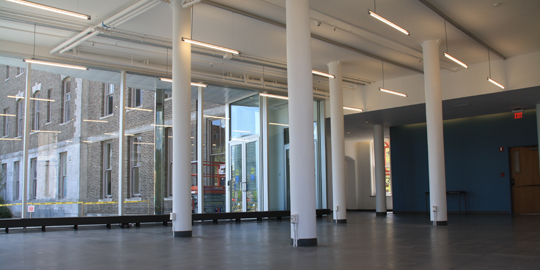 “Being a part of the transformative Huntington Hall building project has been a delight,” says Jacquet. “I’m glad to help open our School of Education to everyone.”

Huntington Hall serves as the administrative home for the School of Education, which also occupies laboratory, instructional and office space in 12 other buildings on campus. The Sharon Haines Jacquet Education Commons provides the first fully accessible and technologically capable space for School of Education events, lectures and receptions, and is equipped for daily use such as student collaboration and study.

Huntington Hall, situated on the corner of Marshall Street and University Avenue, is one of the oldest buildings in the University area. Its original configuration was a three-story wood structure, the Hospital of the Good Shepherd, completed in 1875. To advance Syracuse University’s College of Medicine, the University assumed control of the hospital in 1915. In 1964, the building was re-named Huntington Hall after the late Rt. Rev. Frederick D. Huntington, former Episcopal bishop and the founder of the old hospital.

From 1911-1966 the building went through many configurations from wood to brick, adding wings and floors, changing from hospital to University offices and classrooms, and finally assuming the footprint of the present-day facility. By mid-1970, the building became the home of the School of Education and was modified again in the early 1980s, closing the original Marshall Street entrance and adding an entrance wing off University Avenue and access points in the rear of the building.

Now, the wrought iron fences that used to surround Huntington Hall, serving as a barricade between the School of Education and the community, have been removed, and Huntington Hall has a bold new entrance that faces the crossroads of the University Hill. The new renovation re-opens and expands the historic Marshall Street entrance to Huntington Hall with a gently sloping ramp that is accessible to all. The new main entrance leads into the Sharon Haines Jacquet Education Commons, a space for all faculty, students, staff and alumni to gather.

When designing the entranceway and commons, architect Jonathan Lott focused on the concept “borders divide, space connects.” He is confident the building’s transformation will help the School of Education in its efforts to create the best learning spaces and incorporate as much of the surrounding community as possible. “The project shows a commitment on the University’s part for continual improvement of facilities, creating the best possible learning environments,” Lott says. “This particular project makes a clear statement, erasing any perception of boundary between the academy and its urban context.”