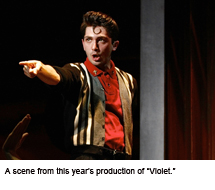 The season is dedicated to Arthur Storch, Syracuse Stage’s founding producing artistic director and SU Drama chair from 1973-1992. Under Storch’s guidance, SU Drama developed into one of the most sought-after B.F.A programs in the country. Storch passed away in March at age 87, in Manhattan, where he taught for many years after leaving Syracuse.

“Arthur Storch’s passion for training the next generation of theater artists is a guiding force for all of us at SU Drama,” says Producing Artistic Director Timothy Bond. “The scope of SU Drama’s upcoming season offers our students an incredible range of theatrical experiences, from large-scale musicals to great works of the western canon to modern classics. Arthur understood that participation in a diverse mainstage season is an essential part of the students’ training, the culmination of their classroom studies. We are honored to continue that tradition.”

“We are delighted that, in selecting plays that support our students’ learning, we can also provide great entertainment for local audiences,” says SU Drama Chair Ralph Zito. “One of the most exciting things about seeing an SU Drama production is that the student performers, designers and stage managers are on the brink of their professional careers. Our record has shown that, in a year or two, these kids will be working on stages in New York City and across the country, in films and on TV.”

As in years past, guiding the students’ work will be faculty directors and faculty mentors. Both faculty designers and student designers will create concepts for scenery, costumes, lighting and sound, and all of the design work will be supported by professional artists from Syracuse Stage. The resulting productions are incredibly polished, a treat for audiences and representative of one of the country’s premier undergraduate theater training programs.

“Seussical” is a fantastical, magical, musical extravaganza by 1970 Syracuse University graduate Ahrens and Flaherty (a Tony-winning duo—”Lucky Stiff,” “Once on this Island,” “Ragtime”). It brings to life all of our favorite Dr. Seuss characters, including Horton the Elephant, the Cat in the Hat, Gertrude McFuzz, lazy Mayzie, and a little boy with a big imagination—Jojo. The colorful characters transport us from the Jungle of Nool to the Circus McGurkus to the invisible world of the Whos.

Set in a hedge school in Ballybeg, in Ireland in 1833, “Translations” sets the scene for the appearance of members of the British Army who have been tasked to translate place names in the area from Irish Gaelic to the King’s English. This clash of cultures results in a series of misunderstandings and misinterpretations that indicate that without a shared method of communication, chaos will prevail and instability will rule the day. “Translations” was the first production by the Field Day Theater Company founded by Tony Award winner Friel and actor Stephen Rea.

The beloved family classic returns to Central New York after a seven-year absence in a music-driven adaptation and production from Peter Amster (“Moby Dick,” “The 39 Steps,” “This Wonderful Life,” “The Fantasticks”). “I was amazed not only at its beauty and durability, but its blazing theatricality,” remarked playwright Linney of Dickens’ most famous Christmas story. “It is part Hamlet, in its devastating revelations by fantastic ghosts, part Everyman, in its sure progression toward spiritual salvation, and part Charlie Chaplin, in its fun and overflowing good spirits.”

This Tony Award-nominated play is a hilarious satire of Hollywood. Charlie Fox has a terrific vehicle for a currently hot client. Bringing the script to his friend Bobby Gould, the newly appointed head of production at a major studio, both see the work as their ticket to the big time. The star wants to do it; as they prepare their pitch to the studio boss, Bobby wagers Charlie that he can seduce the temp/secretary. The New York Daily News called “Speed-the-Plow” Mamet’s “clearest, wittiest play.”

“The Good Woman of Szechwan”
By Bertolt Brecht
Directed by Felix Ivanov
Performed in the Loft Theater
March 28–April 13, 2014

Can we practice goodness and create a world to sustain it? In Brecht’s comic and complex play, this question is raised by one of his most entertaining characters—Shen Tei the good-hearted, penniless, cross-dressing prostitute, who is forced to disguise herself as a savvy businessman named Sui Ta so she can master the ruthlessness needed to be a “good person” in a brutal world.

“Spring Awakening”
Book and Lyrics by Steven Sater
Music by Duncan Sheik
Based on the play by Frank Wedekind
Directed and choreographed by Anthony Salatino
Musical directed by Brian Cimmet
April 25–May 10, 2014

Winner of eight Tony Awards, “Spring Awakening” is a hard-hitting rock musical adaptation of Frank Wedekind’s expressionist play. Set in late 19th-century Germany, the story follows Wendla Bergmann, Moritz Stiefel, Melchior Gabor and their peers as they struggle to understand the meaning of sexuality and violence in an oppressive, repressed society where adults refuse to answer any hard questions.