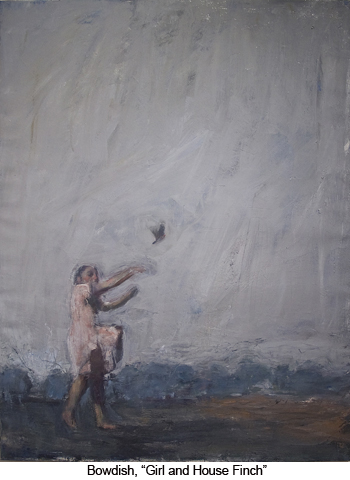 Created to draw attention to the achievements of artists of excellence who have disabilities, the Wynn Newhouse Awards Exhibition at the Palitz Gallery runs through June 13 at SU’s Lubin House, located at 11 East 61st St., New York City. The exhibition is in its third year at the gallery.

“The Samuel I. Newhouse Foundation has given out these awards since 2006,” explains Bill Butler, Newhouse consultant. “In those seven years the level of talent has been consistently excellent. We are proud to reward a few of the many talented artists in this community. We hope these awards and their exposure in the Syracuse University exhibition will help the winners to excel in their craft. We continue these awards because we believe that artists with disabilities often have unique skills and insights that benefit us all.”

Each of the winners receives a portion of a $60,000 per year allotment from the Samuel I. Newhouse Foundation. Nominees and winners of the Wynn Newhouse Awards are chosen by a committee composed of persons respected in the arts and disabilities communities. The selection committee for this year’s awards was composed of J. David Farmer, director, Dahesh Museum; Mark Parsons, former winner and artist, Pratt Institute; Kathryn Price, curator, Williams College Museum of Art; and Ealan Wingate, director, Gagosian Gallery.

Represented by POP International Galleries in New York City, Antar has had numerous museum, solo and group exhibitions, including multiple exhibitions at New York’s National Arts Club. “My passion as a sculptor involves a technique I coined more than 20 years ago, by capturing common everyday items in stone,” says Antar. “I replicate these items on a real life-scale, complete with meticulous detail. I achieve this absolute realism by incorporating parts of the actual object, as well as custom-made stains, paints, plastics and gold leaf. ” Antar is legally blind in one eye.

“When I am behind the easel, I can feel the forms and shapes in my physical body coming out in a very concrete way. It truly is therapeutic,” says Bowdish. “I work solely from imagination and sometimes spend years on the same painting.” Bowdish had his first solo exhibition in 1986 before enrolling in graduate school at the New York Academy of Art on a full scholarship. The artist, who lives with a bipolar disorder, continues to create new works.

Cohen, diagnosed with schizoaffective disorder, has had one-man shows at Vivian Horan Fine Art, Cooper Union, and Gallery New World Stages. His work was shown in an exhibition at the Education and Research Center of the Museum of Modern Art (MoMA). Cohen incorporates mixed media, including photographic cutouts and found objects, into his abstract expressionist oil paintings and paper pieces, to introduce a textural quality and to explore elements of popular culture. Martin is represented by Fountain Gallery of NYC.

Ferguson’s work focuses on human anatomy, inspired by the curvature of her own spine. “As a patient with a lifetime of x-rays, I was always fascinated by these mysterious, shadowy pictures–but felt disconnected from an inner self that seemed to belong more to my doctors than to me,” explains Ferguson. “As an artist I’ve been able to reclaim this territory, and I hope my work can help viewers feel a deeper sense of connection to their own unique inner spaces.” Ferguson’s drawings, prints and artist’s books have been widely exhibited around the country. She has been teaching artist/artist in residence at the NYU School of Medicine since 2008.

Mackenzie credits her hearing loss from the age of 4 as the catalyst for her work today. For Mackenzie, she settled into the world of books because she found them completely accessible and easily understood. “I now literally create worlds from books, and working is a meditative practice for me; I now need to let my mind wander,” says Mackenzie. “It allows me to navigate my subconscious, and I don’t believe I would be as good at doing so without the natural sense of disconnection that comes with hearing impairment.” Mackenzie’s work has been in exhibitions internationally.

When Sherwood suffered a stroke in 1997 and her right side became paralyzed as a result, she considered it a challenge and an opportunity. “[It] had a profoundly liberating effect on my work,” said Sherwood in an article she wrote in the journal Frontiers in Human Neuroscience. “Whereas my pre-stroke period had the tendency to be over-intellectualized and forced, my post-stroke art is less self-conscious, more urgent and expressive.” Sherwood’s work has been in dozens of solo and group exhibitions.

Smith’s work is informed by the sensibilities she’s developed as a hard of hearing person who became deaf in adulthood. “I’ve recently focused on crafting what I think of as ‘silent scores’ in my videos and performances,” says Smith. “Precise editing, movement and experiments in cinematography all work together to imply rhythm and intensity, transposing the process of imagining sound onto the viewer.” Smith has been an artist-in-residence at Seven Below Arts Initiative in Westford, Vt., Art Farm, in Marquette, Neb., and Kimmel Harding Nelson Center in Nebraska City, Neb., and has shown her work in galleries both in the United States and abroad.

Swanson is formally trained as a photographer and the representation of the body as object is predominant in her work. “My practice centers around a critical exploration of the conventions of looking and how bodily difference is articulated and subsequently understood,” says Swanson. “My approach is to resist literal representation of the body through a deconstruction of the conventions of portraiture, the anthropomorphization of inanimate objects, and the construction of surrogates and spaces.” Her work has been exhibited within the United States and internationally.

Wynn Newhouse was a prominent and avid art collector who lost functional use of one hand in an industrial accident as a young man. By midlife he was diagnosed with multiple sclerosis. Newhouse envisioned the Wynn Newhouse Awards in 2005. The program provides grants to talented fine artists with disabilities as defined by the Americans with Disabilities Act. Newhouse was joined by top artists, curators and critics who shared his belief that many disabled people have unique insights and skills that can enhance their ability to create exciting art. He hoped that these exhibitions would enable the arts public to see the many creative ideas contained in their works. Newhouse passed away in 2010.