Philanthropy Week Highlights Importance of Giving Back to SU

Howie Phanstiel ’70, G’71 will talk about his personal philanthropic journey on Friday during Phanstiel Lecture 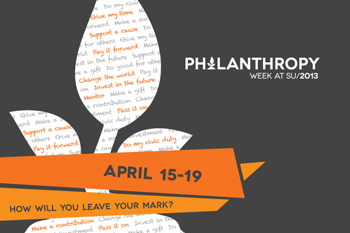 The third annual Philanthropy Week is now under way, with special events planned throughout the week to raise awareness about the vital role philanthropy plays in our society and the importance of giving back to the University, and to recognize those who support SU through generous donations of time, knowledge and money.

“Philanthropy Week is a celebration of the thousands of alumni, parents, employees and friends who voluntarily support SU,” says Alex Klaris ’13 of the Student Philanthropy Council. “We hope our fellow students will be inspired by their generosity and will consider their own lifelong commitments to SU.”

Members of the Student Philanthropy Council, created in 2010, serve as hosts for the week. These student ambassadors come from various academic majors and class years, but share a common commitment to giving back and supporting SU, helping to build a culture of philanthropy on campus.

All the tuition and fees students pay cover only about 85 percent of the cost of running SU. That’s why Philanthropy Week takes place in April, approximately 85 percent of the way through the school year. Philanthropy and other income cover SU’s operating costs for the rest of the year. “Philanthropy Week is a chance for each of us to reflect on the importance of donors’ gifts, as well as reflect on our own ability to help keep SU great,” says David Murray, executive director of special campaigns and initiatives in the Office of Development.

Support from Howie Phanstiel ’70, G’71 and his wife, Louise, played a large role in the creation of Philanthropy Week. In 2010, the couple created the Phanstiel Scholars program, which not only provides financial resources for middle-class students to attend SU, but also creates a spirit of philanthropy among Phanstiel Scholarship recipients. Phanstiel Scholars are expected to pay forward their time, money and talent to make the world a better place.

Howie Phanstiel, a graduate of The College of Arts and Sciences and the Maxwell School of Citizenship and Public Affairs, and Louise Phanstiel gave $20 million to create the Phanstiel Scholars program. In addition, they have given $5 million to the Maxwell School for the creation of the Phanstiel Chair in Strategic Management and Leadership, which serves their vision for promoting outstanding leadership in the public sector. Additionally, the Phanstiels made a gift of $1.2 million to help finance the building of the Carmelo K. Anthony Basketball Center.

The Phanstiel Scholars program also includes the Phanstiel Lecture. This year’s lecture will be delivered by Howie Phanstiel on Friday, April 19, at 11:30 a.m., in the Life Sciences Auditorium, Room 001 of the Life Sciences Building. The lecture is free and open to the public. Phanstiel will talk about his personal journey, the role philanthropy plays in his life and his belief that giving to others is key to lifelong happiness.

The Orange Circle Awards will be presented immediately following the lecture to recognize altruistic members of the SU community who have done extraordinary things in the service of others. This year’s Orange Circle Award winners are Richard Dulude ’54, Louise Phanstiel, and Melvin (G’73, G’78) and Patricia (G’77) Stith.

Members of the Class of 2013 have been encouraging their classmates to support the part of SU that means the most to them with a gift to the 2013 Senior Class Giving campaign. Last week, the class held “Class Act Day,” encouraging seniors to make $20.13 gifts.

Wednesday 4/17: A reception will be held at Club 4.4 in the Carrier Dome for students who have made gifts to SU this academic year.

Thursday 4/18: Tuition Runs Out/Philanthropy Kicks In Day/Thank a Donor Day. This is the day that tuition “runs out” and donor contributions take over. All members of the SU community are invited to thank donors on Twitter using hashtag #suthanks or on the web at thanks.syr.edu.

Friday 4/19: The Second Annual Phanstiel Lecture will be delivered by Howie Phanstiel at 11:30 a.m. in the Life Sciences Auditorium, Room 001 of the Life Sciences Building. The lecture is free and open to the public. The presentation of the 2013 Orange Circle Awards will follow.

An invitation-only luncheon for students, donors of named scholarships and their scholarship recipients will also be held on Friday.

Philanthropy Week is sponsored by the Division of Advancement and External Affairs. For more information about Philanthropy Week, or how you can donate, contact Murray at 315-443-5178 or drmurray@syr.edu or visit pweek.syr.edu.