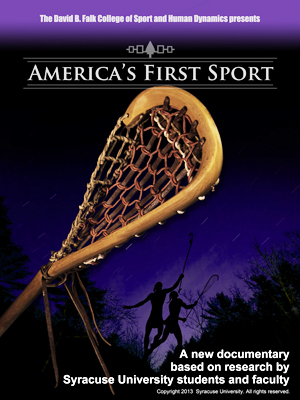 The event, sponsored by the Falk College and the S.I. Newhouse School of Public Communications, will take place April 22 at 4 p.m. in the Joyce Hergenhan Auditorium, Newhouse 3. The symposium is free and open to the public, and will be followed by a question-and-answer session and reception.

The panel, which will be moderated by Dennis Deninger, sport management professor of practice and director of the Newhouse sports communications emphasis, will explore the rich history and impact of lacrosse locally, nationally and globally. The symposium will feature the world premiere of a new documentary, “America’s First Sport,” produced by the Falk College under Deninger’s leadership.

Fifteen students, working closely with Deninger during the fall 2012 semester, began their research on which the documentary was based with the first recorded accounts of sport competition on the North American continent: lacrosse games played by indigenous peoples that were observed by Jesuit missionaries.

Throughout the semester, students explored sports history from the creation of new sports, such as baseball and basketball, the formation of the NCAA and other governing bodies, the Super Bowl’s evolution, and what the future holds with more than 400,000 hours of sports programming now filling the airwaves and attracting millions of fans to online and mobile services each year. For their final project, each student researched a different aspect related to lacrosse, the oldest and now fastest-growing sport in America.

Five students who enrolled in the course during fall 2012 and continued independent study this spring included undergraduates from the Falk College, Newhouse School and the College of Visual and Performing Arts. They have done research on amateur and professional lacrosse to support 50 interviews done by Deninger since February. These include in-depth discussions with Native American leaders, current and legendary players and coaches, presidents of the Federation of International Lacrosse and U.S. Lacrosse, the commissioner of Major League Lacrosse, media from ESPN and Inside Lacrosse Magazine and lacrosse historians.

For more information about the symposium and premiere, contact the Department of Sport Management at 315-443-9881.